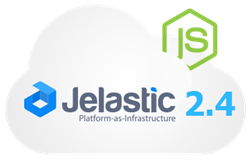 Jelastic was initially architected as a true multilingual platform. Supporting Java, PHP, Ruby, Python and now Node.js, shows our commitment to making it even easier for development and deployment of applications in the cloud.

Jelastic, Inc., the first company to deliver Platform-as-Infrastructure, announced today at JavaOne San Francisco, Jelastic version 2.4 with support for Node.js. From its inception, Jelastic was architected as a polyglot platform. The Platform also supports Java, PHP, Ruby and Python and at the end of 2014, .NET support will be introduced.

The new version broadens Jelastic’s enterprise cloud and multi-language PaaS capabilities by adding Node.js support. Because of the new improvements that 2.4 offers, architects and developers can deploy new or legacy applications to the cloud without code changes, providing them with a scalable, highly-available and secure environment in seconds, and making it ideal for more demanding agile development and DevOps practices.

“The added Node.js support in the Jelastic Cloud opened the platform to a whole new audience. Developers are creatures of habit and they all have their preferred coding languages,” said Ruslan Synytsky, CEO of Jelastic. “That's why Jelastic was initially architected as a true multilingual platform. Supporting Java, PHP, Ruby, Python and now Node.js, shows our commitment to making it even easier for development and deployment of applications in the cloud, providing instant ROI for enterprises worldwide.”

All the functionalities of NPM are available:

“At Elastx, we have had a significant number of requests from our customers for Node.js support by Jelastic. A reasonably large amount of our current users are using or would like to try, for example Angular, so this is great news. Version 2.4 provides our customers with an all-inclusive Node.js implementation that is quick, elastic and supports out-of-the-box integration with popular deployment and build management tools,” said Henrik Grankvist, Business Development Manager, Elastx.

Some other important improvements and features in Jelastic version 2.4:

“Jelastic's new environment transfer feature is a great example of how the platform is maturing to meet the needs of the enterprise developer. It immediately unlocks new levels of time saving as a "Don't Repeat Yourself" project deployment concept for the PaI era. This great feature means Layershift's Jelastic PaaS customers now just deploy once to demo, and after project signoff transfer that fully working environment directly to their client. No fuss, no mess, just saves time and effort.” said Damien Ransome, Service Director at Layershift.

Jelastic’s Platform-as-Infrastructure software provides enterprises, integrators and hosting service providers with a rapid path to new and recurring revenue by offering a turnkey cloud solution that delivers PaaS and IaaS in one. Service providers install Jelastic on bare metal servers and can quickly add new customers looking to deploy and manage applications in the Public or Virtual Private Cloud.

Jelastic enables enterprise architects and developers to deploy new or legacy applications to the cloud without any code changes, providing them with a scalable, highly available and secure environment in seconds. Developers can rapidly set up application and database environments and ensure application resource availability with Jelastic’s automatic vertical and horizontal scaling features. Truly elastic scaling and an innovative pricing model mean that enterprises pay only for resources used, increasing efficiency and driving down costs.

Are you the most interesting developer in the world? Check out part 3 of Jelastic's web series. The Developer. Programmer. Engineer. Somewhat misunderstood, often stereotyped and depicted in popular media as nothing more than an introverted, awkward genius with limited social skills and an obsession with Sci-Fi and video games. Watch Now.

About Jelastic
Jelastic, Inc., provides enterprise software that re-defines the economics of cloud deployment and management. Jelastic is the first company to deliver a Platform-as-Infrastructure solution, combining the flexibility (agility) of IaaS and the ease of use (developer’s productivity) of PaaS within a single platform, for a fraction of the cost of existing virtualized environments. Jelastic is a venture-backed enterprise software company that enables enterprises, OEMs, integrators and hosting service providers to unleash the full potential of the cloud to generate superior ROI and efficiencies. For more information or to start a free, two-week trial, visit us at http://www.jelastic.com.