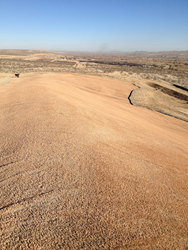 Calvin C. Cox of Cherokee Nation Technology Solutions (CNTS) states “the color selections of HydroTurf™ the slope stability materials were well thought of for a perfect fit in the surrounding native landscape”.

The original soil cap suffered from severe erosion damage thus exposing waste. The site was a also a high potential risk to ecological receptors. Restoration of the surface was considered in the OU 3 Feasibility Study. Calvin C. Cox of Cherokee Nation Technology Solutions (CNTS) states, “the color selections of HydroTurf™ the slope stability materials were well thought of for a perfect fit in the surrounding native landscape.”

The landfill surfaces were restored with an objective to control surface water run-off and prevent future erosion damage and waste exposure. Steep slope areas were severely eroded with some as deep as 6-ft scars. Both the East Slope and Southeast Slope of the landfill were severely eroded. The landfill was restored with over 4 acres of HydroTurf™ Advanced Revetment Technology. HydroTurf™ is an engineered revetment solution specifically designed to provide armoring of hydraulic structures against high velocity and shear stress. HydroTurf™ provides an impermeable geomembrane protected by engineered turf which is infilled with HydroBinder™, resulting in a fiber reinforced high-strength concrete matrix. Construction of the system is rapid, low impact and scalable, reducing the carbon footprint.

“HydroTurf™ was the perfect product solution for George Air Force Base landfill erosion challenges. It offers the aesthetics of blending in with the natural vegetation as Chris mentioned, combined with better performance than a traditional Sub-Title D vegetative cap or various hard armor solutions,” stated Mike Ayers, President of Watershed Geo.

About Watershed Geo
Based in Alpharetta, GA, WatershedGeo is a geosynthetic company specializing in engineered products that solve earth’s greatest challenges with solutions that reduce risks, require virtually no maintenance and stand the test of time that far exceed the performance of traditional methods through the highest levels of testing. Through best-in-class materials and extreme engineering, our goal is to unearth solutions that eliminate plaguing industry issues while delivering more aesthetically-pleasing and effective results. The company's in house polymer scientists, geotechnical engineers and hydrologists have worked with multiple universities and private research labs to achieve unprecedented performance for its products. Watershed Geo’s stable of products include:

About George Air Force Base
George Air Force Base occupies 5,347 acres and is located in San Bernardino County, California near the cities of Victorville and Adelanto. The base was established in World War II and closed in December 1992. Its mission was to support tactical fighter operations and provided training for air crews and maintenance personnel. To meet mission requirements, the base engaged in a variety of support operations such as aircraft maintenance and fire-fighting training that mandated the use and disposal of hazardous and non-hazardous materials. Site LF-14 is an abandoned base landfill site. It received all base wastes (lube oil, paint, lacquer, naphthalene, PD-680, TCE, cleaning fluids, batteries, fire-fighting foam, hydraulic fluid, etc.) since the base opened in 1941 and closed to military use in 1993.