Benjamin Zephaniah will speak about his latest work as part of a series of Black History Month events in east London involving Birkbeck, University of London. 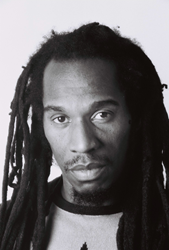 "These events are an ideal opportunity to recognise the contribution of black culture to our society." Dr William Ackah, Birkbeck, University of London

Acclaimed poet Benjamin Zephaniah will speak about his latest work as part of a series of Black History Month events and film screenings involving Birkbeck, University of London.

The writer and musician will discuss his new novel "Terror Kid" with filmmaker Fahim Alam at the Stratford East Picturehouse at the first of eight sessions taking place throughout October in Stratford.

Sci-fi films featuring black characters and communities, including "I, Robot" with Will Smith, and "Attack the Block", about a London housing estate, will also be shown at the Stratford East Picturehouse as part of the collaboration involving Birkbeck, The New Black Film Collective, and the Nu Social Health Organisation.

Academics from Birkbeck will discuss the involvement of black soldiers from the British Empire in World War One, and the importance of Black Studies at Birkbeck’s east London campus at University Square Stratford. Birkbeck is co-organising five of the eight sessions throughout Black History Month. The three films and two discussions co-organised by Birkbeck are free to attend.

Dr. William Ackah, a lecturer in Community and Voluntary Sector Studies at Birkbeck, will be speaking about the relevance, importance and wide-ranging nature of Black Studies. He said: “These events are an ideal opportunity to recognise the contribution of black culture to our society. Black Studies are needed to counter the damaging and corrosive idea that black culture is somehow anti-intellectual and that black people are not capable of contributing meaningfully to the intellectual life of this country. ”

The events are listed below. Places can be booked online through Birkbeck and the Stratford Picture House.

Benjamin Zephaniah’s work is known for his brilliant and distinctive voice and its focus on important social and political issues. "Terror Kid", his first novel in seven years, is set against the backdrop of the 2011 riots, and tells the extraordinary tale of how one boy’s idealism and passion to speak out is distorted and manipulated by those who want to commit acts of terror. Benjamin will be talking about the issues he tackles in his novel – examining our judgements, intentions and actions, and also the timely issues of terrorism, hacktivism and the exploitation of young people. Always impactful and thoughtful, Benjamin Zephaniah is not to be missed.

In its depiction of the near future, human beings have become almost completely dependent upon robots to carry out any given task from their everyday lives. As technology has advanced so too have the robots' capabilities, but each is programmed to obey humans without question and most importantly to never harm a human. Soon though, the human race’s sense of security is shattered when a scientist winds up dead and a humanoid robot is the main suspect. Everyone quickly becomes suspicious of their mechanised house servants and can only hope their safety is not at risk. Will Smith (Men In Black, ALI) stars as Del Spooner, the robot-hating Chicago cop who is assigned to the murder investigation.

A thousand years into the future, having abandoned a terminally ravaged Earth, humankind has colonised a distant planet, from which legendary space ranger General Cypher Raige (Will Smith) embarks on a routine mission with his wannabe-ranger son Kitai (Smith’s real-life son Jaden). But when their spacecraft crash-lands on Earth, a critically wounded Cypher obliges Kitai to retrieve a rescue beacon. Against terrifying odds, Kitai desperately tries to complete his mission and become the soldier even his father doubted he could be. From a story written by Smith Snr, M. Night Shyamalan (The Sixth Sense, Signs) has fashioned a tense, visually amazing sci-fi heart-stopper.

Dr Andre Asibong is a Senior Lecturer and the co-founder of the Birkbeck Research Centre in Aesthetics of Kinship and Community. He will talk about emotions, father-son relationships in film and in reality, the 'internalized father', and cultural transmission across the generations.

An intricate tale of “medicine, monopoly and malice”, Fire In The Blood tells the story of how Western pharmaceutical companies and governments blocked access to low-cost AIDS drugs for the countries of the global south in the years after 1996 - causing ten million or more unnecessary deaths - and the improbable group of people who decided to fight back. Shot on four continents and including contributions from global figures such as Bill Clinton, Desmond Tutu and Joseph Stiglitz, Fire In The Blood is the never-before-told true story of the remarkable coalition which came together to stop ‘the crime of the century’ and save millions of lives in the process.

Reubs Walsh is Birkbeck SU’s LGBT Officer, and one of the NUS LGBT Campaign’s trans reps. In the latter role, they are working on a national project to improve access to sexual health services for trans people. They recently attended UNAIDS’ conference on preventing HIV in young LGBTQ people in Europe. Reubs will provide a perspective on the intersection between black and LGBT communities.

Attack the Block is a fast, funny, frightening action adventure movie that pits a teen gang against an invasion of savage alien monsters. It turns a London housing estate into a sci-fi playground. A tower block into a fortress under siege. And teenage street kids into heroes. Leader of the youthful gang, Moses, (John Boyega) attacks a common alien enemy with the residents. It’s inner city versus outer space in this stylish sci-fi romp from the producers of Shaun of the Dead and Scott Pilgrim vs. the World.

Dr Paul Watt is a Senior Lecturer in Urban Studies at Birkbeck. His academic interests lie in cities, class formation and the inter-relationships between social and spatial inequality. Dr Watt will talk about the London housing crisis in the 1960s, how it relates to today’s housing situation and how it affects Black communities in our capital.

The upheaval of the First World War witnessed the enlistment of thousands of Black British men from across the empire in the British armed forces. The men who emerged from this terrible experience had their eyes opened to possibility of breaking the bonds of empire. Alongside of the millions of African American, French African and South Asian soldiers the Great War marked the beginning of a journey away towards freedom. This master class will introduce you to this important period in Black history and how it shaped the twentieth century world.

Black Studies – a social science covering subjects such as history, politics, religion, the arts, economics, geography and psychology – is needed to counter the damaging and corrosive idea that black culture is somehow anti-intellectual and that black people are not capable of contributing meaningfully to the intellectual life of this country. Black Studies include, for example, the examination of the Notting Hill carnival, building insight into its historical significance and connections to the Caribbean, South America and Africa, the complex religious symbolism that underpins it, its economic, geographical and cultural impact, and its role in establishing London as a global city.
Dr William Ackah a lecturer in Community and Voluntary Sector Studies at Birkbeck will deliver this talk, examining the place of Black Studies in the UK academia.

Set in the near future a former soldier is taken captive and awakens in the back of a van with no memory of how he got there. Accused of kidnapping a child Ryan tries to put the pieces together but nine minutes and forty seven seconds later he loses consciousness again. Under impossible circumstances he has no choice but to search for the answers to the mystery behind his memory losses. Anomaly is a unique sci-fi thriller, directed and starring Noel Clarke (Doctor Who, Star Trek into Darkness, Adulthood), that explores the idea of mind control. Also featuring Ian Somerhalder, Brian Cox, Alexis Knapp, and Luke Hemsworth.

London’s own Noel Clarke is probably best known for his role as Mickey Smith in Doctor Who, as well as for creating films like Kiduldhood and Adulthood.

Ian Christie is a Professor of Film and Media History at Birkbeck, he is a frequent guest on BBC4 and BBC2. His interests span a great range of topics from local history of screen entertainment in London to Russian cinema, and the digital revolution.

Professor Ian Christie in conversation with Noel Clarke will talk about what it means to be a filmmaker, the exodus of the Black talent to the US and the Act for Change campaign.