His Holiness Pope Tawadros II appeared at the 25th Anniversary Gala of Coptic Orphans on Sept. 28, 2014, in Canada, where he received the Christian development organization's Leading by Example Award before an audience of over 500 guests. 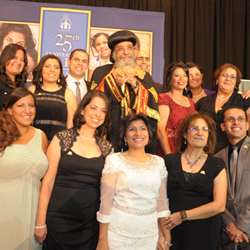 His Holiness Pope Tawadros II appears with Coptic Orphans staff at their 25th Anniversary Gala in Brampton, ON, Sept. 28, 2014

I congratulate the [Coptic Orphans] staff in Canada, the United States, Australia, and Egypt and tell them: Bravo for your service, and I'm not sure who's happier, you or the children you serve — you are all happier!

Coptic Orphans' 25th Anniversary Gala, at which His Holiness Pope Tawadros II accepted the Leading by Example Award before an audience of more than 500 guests, was held Sept. 28 in Brampton, Ontario.

"Coptic Orphans is incredibly honored and blessed that His Holiness Pope Tawadros II, 118th Pope of Alexandria and Patriarch of the See of St. Mark, was guest of honor at our 25th Anniversary Gala in Canada," said Coptic Orphans founder and executive director Nermien Riad.

"His Holiness Pope Tawadros II was our clear choice to receive the Leading by Example Award, which honors pioneers whose character and achievements make them role models in Egypt and around the world, because of his noble and constant efforts to realize his vision of an Egypt of tolerance and prosperity, where Christians and Muslims live alongside one another in peace," Riad said.

His Holiness Pope Tawadros II told the audience at the Pearson Convention Center: "I served indirectly with Coptic Orphans in the areas where I was general bishop alongside Bishop Bachomious. During this time, I watched Coptic Orphans and their very effective service in three locations: the border city of Marsa Matrouh; King Mariout, a desert city; and El Beihira, which is an agricultural governorate. I watched them impact all three of these areas."

"I congratulate the [Coptic Orphans] staff in Canada, the United States, Australia, and Egypt and tell them: Bravo for your service, and I'm not sure who's happier, you or the children you serve — you are all happier!" said His Holiness Pope Tawadros II, who leads the Coptic Orthodox Church of Alexandria and its 8-12 million members worldwide.

"Any person who serves the children, especially in the area of education, is considered to have understood the Truth — as having discovered the key to change and the key to development in our communities, which need development, such as in Egypt," said Pope Tawadros II.

"His Holiness Pope Tawadros' presence at our 25th Anniversary Gala was an incredible honor, and an affirmation of the years of work that Canada's Coptic community have devoted to educating and empowering Egypt's children," said Manal Bedwany, who directs Coptic Orphans' office in Canada.

"Coptic Orphans has two more 25th Anniversary Galas coming: one in the U.S. on Oct. 11, and one in Australia on Nov. 9," said Riad. "I'm so proud that we could launch these three galas by presenting the Leading by Example Award to His Holiness Pope Tawadros, because he has been an incredible advocate for the children as far back as 1999, when he worked with Coptic Orphans as a general bishop."

"Coptic Orphans is blessed to mark 25 years of work that have educated and empowered 30,000 children in Egypt," Riad said. "Our guests tonight showed their deep commitment to achieving the gala's theme, 'Honoring the Promise' each of us has made to the children and our motherland."

Gala guests signed up to sponsor over 100 orphans in Egypt.

"Coptic Orphans works to keep orphans in their own family environment, while building a personal relationship between sponsor and child that uses education to break the cycle of poverty," said Riad. "I'm extremely thankful to our new sponsors, and especially to the more than 2,500 Canadians whose prayers, love, and support have changed the lives of children in Egypt over the years."

His Excellency Amin Meleika, Consul General of the Arab Republic of Egypt in Montreal, and the Honorable Dr. K. Kellie Leitch, Minister of Labour and Minister of Status of Women, spoke at the gala.

"His Excellency Amin Meleika's speech gave important insights that connected our guests to Egypt, and Minister Leitch reaffirmed the key role that women play in both Canadian and Egyptian societies," Bedwany said.

The Copts, Egypt's indigenous Christian community, have a faith stretching back to the first century AD. They are now a minority of Egypt's population. An estimated 1.5-2.5 million Copts now live in the United States, Canada, Australia, the United Kingdom, and other countries.

Coptic Orphans is an award-winning international Christian development organization that unlocks the God-given potential of vulnerable children in Egypt, and so equips them to break the cycle of poverty and become change-makers in their communities. Coptic Orphans works through grassroots partners and volunteer networks to strengthen local communities for sustainable impact. Since 1988, Coptic Orphans has touched the lives of over 30,000 children throughout Egypt. Headquartered in Washington, DC, Coptic Orphans has expanded to offices in Egypt, Australia, Canada, and the United Kingdom.

His Holiness Pope Tawadros II, 118th Pope of Alexandria and Patriarch of the See of St. Mark, meets with Coptic Orphans in Cairo, July 12, 2014.