The Uptown Cheapskate resale franchise teams up with local restaurant start-ups to celebrate the grand opening of its new flagship store in Sugar House. 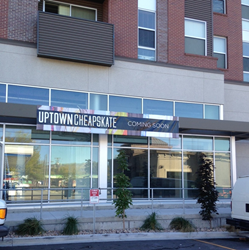 We wanted this opening to be more than just about Uptown Cheapskate. There’s a huge surge right now in start-ups and new businesses in Salt Lake, and we’re excited to celebrate that entrepreneurial culture.

The Uptown Cheapskate franchise is excited to announce the grand opening of its new flagship store located at the corner of 2100 South and 1300 East in the newly developed Westminster at the Draw building in Sugar House. This project celebrates the growth of the Uptown Cheapskate brand, which has expanded rapidly from its first location in 2009 to more than 45 locations nationwide. Uptown Cheapskate is owned and operated by brother-sister team Scott Sloan and Chelsea Carroll, both Utah natives and graduates of the University of Utah.

The grand opening weekend begins Thursday, Oct. 16 at 4 p.m., when customers will be able to shop for trendy second hand clothing and accessories as well as enjoy local flavors. Three new restaurant start-ups, The Press Sweet Cidery, Vive Juicery and Black’s Sliders food truck, will be offering samples of their products. Black’s Sliders is a locally sourced, organic and hormone-free slider truck that began offering food in August. Vive Juicery is a Salt Lake City-based cold-pressed juicery with two locations in downtown Salt Lake City and in Sugar House where they sell fresh, unprocessed juices, almond milks and elixirs. The Press Sweet Cidery is owned by University of Utah grads and offers organic, fresh-pressed cider and pie at their storefront at 4536 S. Highland Drive.

Customers can sample The Press Sweet Cidery, Vive Juicery and Black’s Sliders on Thursday at 4 p.m. to 8 p.m. On Friday, the first 100 customers will receive free waffles from Saturday’s Waffles, another young Utah company. Throughout the weekend, customers will have a chance to win free concert tickets, a $500 shopping spree and the grand prize giveaway, a new 16GB iPhone 6, winner announced at 5 p.m. on Saturday.

"We wanted this opening to be more than just about Uptown Cheapskate," said Carroll. "There’s a huge surge right now in start-ups and new businesses in Salt Lake, and we’re excited to celebrate that entrepreneurial culture. The owners of Black’s Sliders and The Press Sweet Cidery are as passionate about serving great food as we are about helping recycle and give clothing new life."

Unlike a traditional thrift store, this teen and young adult fashion reseller pays shoppers cash for their gently used, name brand clothes, shoes and other apparel items and resells them at up to 70 percent less than retail.

"We love the vibe of Sugar House and all that’s happening down here with new construction and transportation coming in," said Sloan. "It’s just a great fit for our concept, which caters to people who like to dress fashionably but love to recycle and find bargains. Uptown is part of a growing industry that is quickly becoming more widely accepted—even preferred."