Daily aspirin is good for some men, not others, from the October 2014 Harvard Men's Health Watch

Daily aspirin is recommended for those with existing cardiovascular disease. For otherwise healthy men, the small potential benefit of aspirin must be weighed against the risk of unwanted bleeding. 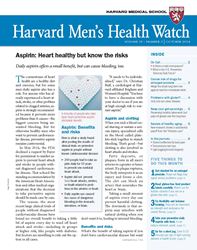 For men who have had a heart attack, stroke, or other problem related to clogged arteries, the benefits of taking aspirin outweigh the risks. In this group, the benefits include preventing a first or repeat heart attack or stroke or dying prematurely from cardiovascular disease. But in otherwise healthy men, the balance of benefits and risks shifts, according to the October 2014 Harvard Men's Health Watch.

The best research to date shows that men who have not been diagnosed with cardiovascular disease glean no overall benefit to taking aspirin every day—including men at higher risk, like those with diabetes.

In otherwise healthy men, aspirin prevents some non-fatal heart attacks, but not strokes. At the same time, it can cause harmful bleeding in the digestive tract. Aspirin use has also been linked to small bleeds in the brain which, though uncommon, can be deadly. In fact, aspirin causes more cases of worrisome bleeding than almost any other medication because so many people take it.

The point at which the chance of being helped by daily aspirin outweighs the bleeding risk varies from person to person. This is why experts recommend an individualized assessment.

"You have to be more thoughtful when considering aspirin for prevention in people without known cardiovascular disease," says Dr. Christian Ruff, a cardiologist at Harvard-affiliated Brigham and Women’s Hospital and assistant professor of medicine at Harvard Medical School. "You need to assess the risk of having a heart attack or stroke and also the risk of bleeding."

Some men take a daily aspirin without checking with their doctors. That's not a safe move. "Although you don't need a prescription for aspirin, you should treat the decision to use it as if it were a prescription drug," Dr. Ruff says.

Also in the October 2014 issue of the Harvard Men's Health Watch:

The Harvard Men's Health Watch is available from Harvard Health Publications, the publishing division of Harvard Medical School, for $20 per year. Subscribe at http://www.health.harvard.edu/mens or by calling 877-649-9457 (toll-free).

Media: Contact Kristen Rapoza at hhpmedia@hms.harvard.edu for a complimentary copy of the newsletter, or to receive our press releases directly.