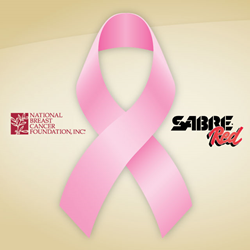 "Giving back to the community has always been a strong goal of the company, and we're thrilled that the success of these products in allowing us to make a real difference," says SABRE CEO David Nance.

SABRE Security Equipment Corporation, the leading brand of pepper spray and personal safety products worldwide is celebrating an elite milestone. This month SABRE will surpass the $1 million mark in their donations to their partner of six years, the National Breast Cancer Foundation, Inc. ®

Like most, the Nance family of SABRE has been touched by cancer, which is why the family-owned company wanted to work with a non-profit that would help others going through the same ordeal. The founder of SABRE passed away from multiple myeloma in 2012 after a fifteen year battle with cancer.

“Women are the largest users of our SABRE personal safety products. Since we've received tremendous support for our brand for four decades, we believe in giving back and helping others,” says current CEO David Nance. “The National Breast Cancer Foundation was very highly ranked and regarded. We learned that a greater percentage of our donations would be used to help fight breast cancer than the other charities we researched.”

Over 80% of the NBCF’s revenue is directed to their life-saving programs each year. The National Breast Cancer Foundation was started in 1991 by a breast cancer survivor with the mission of helping women by educating them about the disease and the importance of early detection. According to the National Cancer Institute, when it’s found early in the localized stage the five year survival rate of breast cancer is 98%. Since 1991, the NBCF has helped over ten thousand women in all 50 states and around the world.

“SABRE Red has been steadfast in their support of NBCF’s mission to help women now,” says NBCF Founder and CEO Janelle Hail. “Since 2008, they've raised $1 million and helped provide over ten thousand mammograms and early detection services for those in need. We look forward to this year’s campaign because we know their impact will extend to women in all 50 states.”

SABRE manufactures a line of pink products, four different pepper sprays and a personal alarm to generate funds for the National Breast Cancer Foundation. For each pink product sold, SABRE is able to make a donation. This isn’t just an initiative the company takes on during National Breast Cancer Awareness Month in October, it’s a year-round fundraising effort that supports cornerstones of both organizations: empowering women to protect themselves by giving them the necessary tools and education.

“We are so thankful for the huge support these products have received,” says Nance. “Giving back to the community has always been a strong goal of the company, and we’re thrilled that the success of these products is allowing us to make a real difference.”

To learn more about SABRE’s pink products and the company’s partnership with the National Breast Cancer Foundation, visit http://www.sabrered.com/nbcf/ or follow SABRE on https://www.facebook.com/sabreredpepperspray, https://twitter.com/sabrered and http://instagram.com/SabreSafety.

About SABRE
SABRE Security Equipment Corporation, family owned and operated with four decades of experience, is the leading brand in personal and home safety offering superior protection tools for professionals and consumers. The exclusive choice of the New York Police Department, Los Angeles County Sherriff’s Department and the U.S. Department of Defense, this brand empowers consumers with the same quality, safety and responsibility trusted as the #1 choice of thousands of police departments worldwide. Be Smart – Be Ready – Be Safe.

About the National Breast Cancer Foundation Inc. ®
Recognized as one of the leading breast cancer organizations in the world, the National Breast Cancer Foundation’s (NBCF) mission is to help women now by providing help and inspiring hope to those affected by breast cancer through early detection, education, and support services. A recipient of Charity Navigator’s highest 4-star rating for ten years, NBCF provides women Help for Today…Hope for Tomorrow® through its National Mammography Program, Beyond The Shock®, Early Detection Plan, MyNBCF online support community and breast cancer research programs. For more information, please visit http://www.nbcf.org.