Karl Strauss Mosaic Session Ale Is Unstoppable, Winning Medals in 3 Out of 3 Competitions! 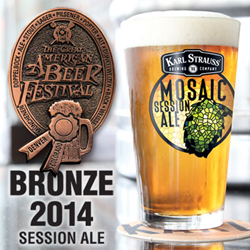 It’s always validating when your peers give props to your beer, and to see Mosaic win yet another medal just proves how special this beer is.

Karl Strauss Brewing Company’s Mosaic Session Ale is taking the beer world by storm! Mosaic has medaled in every competition it’s been entered in, and the beer most recently took home a bronze medal in the Session Beer category at the esteemed 2014 Great American Beer Festival® this past weekend in Denver. “We are thrilled that Mosaic is doing so well in competitions,” says Paul Segura, Brewmaster, Karl Strauss Brewing Company. “It’s always validating when your peers give props to your beer, and to see Mosaic win yet another medal just proves how special this beer is.” The Great American Beer Festival® is the country’s largest and most prestigious beer competition featuring 5,507 competition entries from 1,309 breweries, hailing from 50 states plus Washington, D.C.

“This beer is on fire—the batch we made was supposed to last months, and instead it was gone in just a few weeks!” Mosaic Session Ale was first brewed as a small-batch beer at one of the company’s satellite breweries before quickly becoming a fan-favorite. Mosaic is the latest release in the company’s hop-inspired Coastal Reserve Series and showcases the newly developed Mosaic hop, known for its intensely citrusy and vibrant tropical flavor and aroma. “This beer is San Diego in a glass—hoppy as hell, dry, and easy to drink. And its lower ABV means you can enjoy more than one,” says Segura. After the initial run, production was immediately scaled-up and the company officially launched the beer in May of 2014. Karl Strauss is now making plans to ramp up production in 2015 to satisfy increased demand.

About Karl Strauss Brewing Company
Karl Strauss Brewing Company has pioneered the San Diego beer scene since 1989 with innovative beer releases like Big Barrel IIPA, Wreck Alley Imperial Stout and Mosaic Session Ale. The brewery has won 65 medals over the past four years and its Red Trolley Ale is one of the most award winning beers in the world. The company is currently ranked #41 on the list of the country’s top craft breweries with sole distribution in California. 2014 is on pace to be another exciting year of double-digit sales growth, with the main brewery tasting room and beer garden in Pacific Beach now open. For more information visit http://www.karlstrauss.com or call the brewery at (858) 273-2739. Share it. Cheers.