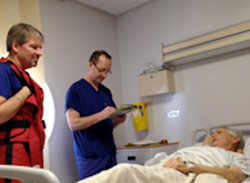 Nobles Medical Technologies II, Inc. (NMT2) today announced that it has begun the process to enroll patients for the US Clinical Study of its NobleStitch EL PFO Closure System. Earlier this year the first American patient to be treated using the NobleStitch EL had a successful PFO closure. http://www.prweb.com/releases/Nobles_Medical/NobleStitch-EL/prweb11851720.htm

Open enrollment for the NobleStitch EL clinical study is set to begin. The study is scheduled to encompass 30 subjects; to be comprised of both Men and Women, over eighteen years of age, who have been diagnosed with either a PFO “Patent Forman Ovale”, or a Iatrongenically created atrial septal defect with bi-directional shunting.

PFO or “Patent Foramen Ovale,” is a condition in which the tunnel between the left and right side of the heart did not close shortly after birth. This condition exists in more than 27% of the population. Some recent studies have also noted a possible link, citing that PFO is found to be more common in individuals with certain conditions, such as unexplained stroke and migraines accompanied by aura.

Traditionally PFO has been treated in the United States with invasive chest surgery. In recent years advancements have been made utilizing a percutaneous technique that does not require open-heart surgery. The NobleStitch EL employs new technology, which was developed by medical device inventor Prof. Anthony Nobles. The NobleStitch enters percutaneously through the vein in the leg and travels into the heart under the guide of fluoroscopy (X-ray). Utilizing the NobleStitch Closure System a Cardiologist can then place a suture in the PFO to close the tunnel. This is the substantially similar to the type of suture that is used in the open-heart procedure, but without the surgery. With use of the NobleStitch the procedure can take less than 20 minutes.

Professor Tony Nobles commented, “expanding our current FDA clearance with specific indications is a goal for Nobles Medical Technologies II, Inc. as it continues to expand the marketing and sales of the NobleStitch EL throughout the world. With our current expansion in Europe, Nobles Medical Technologies II, Inc. is now looking to the larger US market. We believe embarking on this clinical study will yield additional US based data for the NobleStitch EL”.

Nobles Medical has been used successfully in patients Europe since 2009. Nobles Medical Technologies II, Inc’s President Ben Brosch noted “The US Market is a crucial market for us. This Study is a significant step in executing our plan in the United States."

Nobles Medical Technologies II, Inc. is also continuing the expansion of its marketing worldwide. The company has plans to enter into several distribution agreements in the next quarter for Australia, the U.K. and China. Nobles Medical’s CEO Prof. Anthony Nobles recently commented that he believes the company is “now ready to expand into markets around the world to grow our strategic business.”

The upcoming clinical study will be conducted in conjunction with a leading Southern California hospital and Interventional Cardiologist. The screening and diagnosis of PFO “Patent Forman Ovale” or ASD “Atrial Septal Defect” is evidenced by echo cardiographic imaging and saline contrast injection.

About the NobleStitch EL System
Nobles Medical Technologies II's, NobleStitch EL is a catheter-based system that allows a physician to place a suture in the PFO tunnel in the heart through a percutaneous puncture in the leg, in many cases under a local anesthetic in a catheter lab rather than in an operating room. This eliminates the need for open-heart surgery or placement of a metallic implant in the heart. The NobleStitch is not a “device” or mechanical implant; it only places a simple polypropylene suture in the heart. By closing the hole or PFO, the therapy will reduce or eliminate the shunting from the right to the left side of the heart, allowing the lungs to filter the clots and other chemicals and preventing them from going straight to the brain, potentially halting strokes and severe migraines and enabling patients to live a higher-quality life.

The NobleStitch EL is FDA cleared for “performing vascular stitching in general surgery, including endoscopic procedures. The NobleStitch™ EL, is not intended for blind vascular closure.”

The NobleStitch EL is CE marked for “Cardiovascular Suturing including PFO Closure; Single-Use Device with Accessories.”