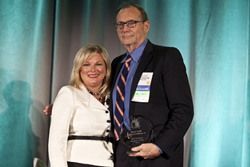 They are protecting some of the most influential organizations in the world and each has made a significant, positive impact for their organization’s security posture...

Mark Graff, chief information security officer for NASDAQ OMX Group, was selected as the Information Security Executive® of the Year Award winner for the ISE® Northeast Region. Graff has a history of continued success in protecting one of the world’s largest exchange companies. He focuses on continuous improvements to software security and emphasizes speed as crucial to incident response. A highly respected author and public speaker, Mark is passionate about working to protect the global economy by sharing his essential knowledge with both political decision makers and industry leaders. In the last year, he championed the inaugural NASDAQ OMX Defense of International Markets and Exchanges, which addressed key cyber security issues pertinent to exchanges around the globe.

Jim Routh, chief information security officer for Aetna, and Charles Hudson, Executive Director, National Governance, Risk and Compliance, were honored during the event as finalists in the executive category. Hudson was also named the 2014 ISE® Northeast People’s Choice Award Winner. This award represents the nominee who best exemplifies information security leadership as voted on by his peers in information security.

The MIAX Options “Enterprise-wide Risk Dashboard and Alerting” project was selected as the ISE® Northeast Project of the Year. John Masserini, chief information security officer, accepted on behalf of the project, which focused on deploying a best-of-breed security information and event management solution. The platform built now enables every business unit within the organization – from regulatory compliance to trade operations to security – to monitor, alert and report on corporate-wide risks, and has become the messaging backbone of the entire organization.

Project finalists that were also honored during the evening include Citi’s “Network Access Control,” Comcast’s “IT Security Analytics,” and the University of Connecticut’s “Comcast Center of Excellence for Computer Security Innovation & Center for Hardware Assurance, Security, and Engineering.”

“The 2014 finalists and winners epitomize the innovation and values for which the ISE® Northeast Awards are known. They are protecting some of the most influential organizations in the world and each has made a significant, positive impact for their organization’s security posture,” said T.E.N. CEO and President Marci McCarthy. “We are honored to have each and every one of our nominees join the ranks of our distinguished ISE® Alumni.”

Our distinguished ISE® Judges are past nominees representing a cross section of industries, including commercial, government, health care and academic sectors. For this reason, the ISE® Awards represent the best achievements of the year as evaluated by those regarded as the industry's most influential and successful thought leaders. Coupled with a one or two-day executive summits, the ISE® Awards are held across the U.S. and Canada in major cities including Atlanta, Dallas, New York, San Francisco and Washington, D.C. The ISE® Awards Program Series has reached more than 10,000 executives across a broad range of industries and has been a major influence in executives’ careers, knowledge sharing, and the development of peer-to-peer relationships.