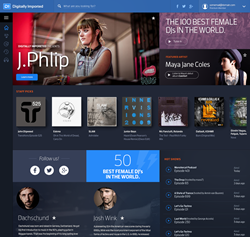 "By rethinking our entire approach to licensing, we are opening up a completely new user experience that transcends historic barriers." Ari Shohat, CEO, Digitally Imported

Digitally Imported, the premier online radio destination for electronic music fans around the world, today announced plans for the first electronic music platform to fully integrate streaming radio, on-demand features, and retail sales under a single user experience and brand. Digitally Imported also announced that the first nine independent content distributors have signed the electronic music market’s first content licensing agreements to include non-interactive, interactive and master rights to enable complete integration across the three key areas of online music consumption. The announcement was made from the Amsterdam Dance Event conference, where music industry leaders from around the world gathered this week to share the latest news and innovations in electronic and digital music.

By securing comprehensive digital music rights from its content providers, Digitally Imported will be able to fill the demand for an all-inclusive electronic music experience, something which has been unavailable in the market until now. In addition, the new model allows Digitally Imported to capture revenues from subscriptions and download sales within its brand while creating a highly targeted opportunity for advertisers. Among current Digitally Imported subscribers, 90% of monthly subscribers renew their premium subscriptions, 95% tune in at least once a week, and 87% maintain their own music collections.

“The electronic music market has seen explosive growth recently, but user experience has lagged behind,” said Ari Shohat, CEO of Digitally Imported. “Most electronic music services only provide a fraction of what users are demanding. By rethinking our entire approach to licensing, we are opening up a completely new user experience that transcends historic barriers.”