Dangerous new ransomware variant storms onto the scene using the anonymous TOR network, taking down systems and networks unlucky enough to be caught in its path. 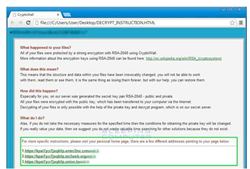 This is the next generation of ransomware and you can expect this new version to spread like wildfire. - Stu Sjouwerman, CEO KnowBe4

KnowBe4 issued an alert to IT Managers that a new version of the world's most widespread ransomware CryptoWall has migrated to the TOR network. It has been upgraded to version 2.0, and continues to encrypt files so that a ransom can be extracted if there are no backups or if the backup process fails, often a common occurrence.

KnowBe4 received a panic call from an IT admin who was hit this week with CryptoWall. The admin’s workstation became infected with the malware. The workstation was mapped to 7 servers and within an hour, the entire server farm was shut down. The admin explained he had backups but it would take days to recover the data and get them back up and running. The company’s operations would be severely impacted.

“The cyber criminals hit pay dirt with this one and the admin ended up paying the ransom, 1.3 Bitcoin, rather than face the serious costs caused by days of downtime, said Stu Sjouwerman, KnowBe4’s CEO. “This is the next generation of ransomware and you can expect this new version to spread like wildfire.”

CryptoWall 2.0 went live October 1st and is now using the anonymous TOR network, making it very difficult to analyze or take down. Earlier versions of CryptoWall were not using TOR but HTTP, which allowed researchers to analyze the communication between the infected machine and the command & control server so they could take down the servers that delivered the malware. This version of CryptoWall has been tested for months and the malware uses innovative ways to propagate itself, like using ads on websites that take advantage of vulnerabilities in browsers and unpatched plug-ins.

Sjouwerman advises these three steps as something IT admins have to do:

1." Make regular backups, and have a backup off-site as well. TEST your restore function regularly to make sure your backups actually work.
2. Patch browsers as soon as possible, and keep the amount of plug-ins as low as you can. This diminishes your attack surface.
3. Step all users through effective training on security such as Kevin Mitnick Security Awareness Training to prevent malware infections to start with."

For end users, Sjouwerman advises, “Think before you click. Don’t open anything from someone unless you are expecting it. Hover over an email address to make sure its from a valid domain, one you know and recognize.”

KnowBe4 offers a free Phishing Security Test(PST) to find out just how many of your users are Phish-prone. KnowBe4 also offers a Crypto-Ransom guarantee and is confident its training works so well, they will pay your ransom if you get hit with ransomware while you are a customer.

About Stu Sjouwerman and KnowBe4
Stu Sjouwerman (pronounced “shower-man”) is the founder and CEO of KnowBe4, LLC, which provides web-based Security Awareness Training (employee security education and behavior management) to small and medium-sized enterprises. A data security expert with more than 30 years in the IT industry, Sjouwerman was the co-founder of Inc. 500 company Sunbelt Software, an award-winning anti-malware software company that he and his partner sold to GFI Software in 2010. Realizing that the human element of security was being seriously neglected, Sjouwerman decided to help entrepreneurs tackle cybercrime tactics through advanced security awareness training. KnowBe4 services hundreds of customers in a variety of industries, including highly-regulated fields such as healthcare, finance and insurance and is experiencing explosive growth with a surge of 427% in 2013 alone. Sjouwerman is the author of four books, with his latest being Cyberheist: The Biggest Financial Threat Facing American Businesses.

About Kevin Mitnick
Kevin Mitnick is an internationally recognized computer security expert with extensive experience in exposing the vulnerabilities of complex operating systems and telecommunications devices. He gained notoriety as a highly skilled hacker who penetrated some of the most resilient computer systems ever developed. Today, Mitnick is renowned as an information security consultant and speaker, and has authored three books, including The New York Times best seller Ghost in the Wires. His latest endeavor is a collaboration with KnowBe4, LLC.

A short history of ransomwareRansomware whitepaper