International Reggae star the “Queen of Reggae”, Marcia Griffiths joins an eclectic lineup of award winning musicians at the inaugural ONE Caribbean Music Festival as she celebrates 50 years in the industry. 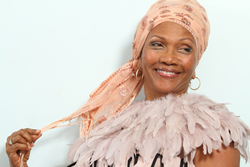 Marcia Griffiths is one of the best-known most influential women in the history of reggae she has reigned as the “Queen of Reggae”, ruling the charts and rocking the Reggae industry for fifty years. Marcia will be celebrating her history making 50 years at the ONE Caribbean Music Festival to be held at the Central Broward Regional Park, Fort Lauderdale on December 13th & 14h, 2014. Early bird general admission is $43 and VIP is $80. She will be performing signature hits like “Electric Boogie” and "Feel Like Jumping,” among new material treating fans to a once in a lifetime experience.

As member of the legendary I-Threes, the backing group for Bob Marley and the Wailers, one might assume Marcia Griffiths’ transition to a globetrotting solo recording artist was easy. This could not be further from the truth. When she began her solo career in the 1960’s there were no female fore runners to open doors for her. She worked and fought for her success and her crown and set the blue print for women in Reggae becoming an inspiration for many. Still she remains a regal spirit choosing to emphases the positive aspects of her struggle, which also translates in her music. “My journey was a long and beautiful one,” she shared in a recent interview.

Celebration is the theme for Marcia this year. Having started the year with the Jamaica Jazz and Blues Festival, where she gave a critically acclaimed performance she being very excited to close the year at the One Caribbean Music Festival. According to Marcia, her upcoming performance “is like putting the icing on the cake yet still reminding my fans that I am ready and prepared for another 50 years with their support.”

Added to the line up, the man with Jamaica’s Golden Voice, Richie Stephens, a classic performer who contributed much to the development of Reggae Music. His magnetism appeals to audiences all over the world as he rolls into his ballads hearts begin to flutter. He will debut his latest ska dance sensation, The Eveybody Dance at the festival. In a recent interview the songwriter and singer shared the origin of the dance, “It came from a performance in Germany. I was performing on a show and decided to dance to a ska beat and the crowd just couldn't get enough. They screamed so loud I had to dance for much longer.” With the recent release of the music video, there has been a growing international buzz with everyone learning the steps to this new dance. Undoubtedly, while dancing on stage he will be singing his other well known hits including “Live Your Life”.

The weekend celebrations of Caribbean cuisine, art, music and culture will host the melodious sounds of the region. Founded in 1968 and hailing from the hills of Haiti via New York, the internationally acclaimed and award winning “Ambassadors of Kompa,” Tabou Combo, will grace the stage. Rendering their many hits in English, French, Spanish, and Creole, they will bring a combination of soukous, funk, merengue, rara, with a dominant konpa and some Brazilian influences. They were the first Caribbean band to have a number #1 in the French Hit Parade. International musician, Carlos Santana covered their hit “Mabouya” to which the title was renamed “Foo Foo.” They were the first Haitian band to perform in Japan and throughout the African Continent: Ivory Coast, Senegal, Gabon and were named "The Official Panamanian Band" due their popularity in Panama.

Also added to the lineup is Peter Lloyd, known to his fans as the Love Messenger. 2014 has been a successful year for Peter Lloyd, with his monster track, “Blood on your Hands” which went to number one (1) on the reggae charts in Jamaica, Germany, France, Russia, Canada, New York and Atlanta. It garnered over one (1) million views on YouTube. Quite recently, in a special CNN feature series, “Roots: Our Journey Home” Peter was instrumental in assisting New Day anchor, Michaela Pereira on her quest to find her Jamaican heritage. Roots: Our Journey Home is a weeklong series that features prime journalists such as Anderson Cooper, Erin Burnett and Dr. Sanjay Gupta on a journey of discovery for their personal roots.

An official BROWARD100 sanctioned event, ONE Caribbean Music Festival will harness international talent with Caribbean roots, rock, soca, reggae & soul. An event not to be missed, patrons will be encouraged to donate an unwrapped toy for a child in the region.

About Broward 100
Celebrating the Art of Community Broward 100 will commemorate Broward County’s centennial with bold, innovative art and performance projects that attract visitors and bring Broward residents together using the arts, sports, recreation venues, our natural attractions and our incredible diversity to creatively bridge, bond and build their communities. Broward 100 will be framed by four distinct cornerstones of community engagement: VisualEYES, Inside Out Broward, Calendar 100 and a culminating event.

About Art of Music Productions
The producers of the event, Art Of Music Productions, has over 20 years experience in producing and promoting music festivals throughout the Caribbean, and has now entered the US market beginning with South Florida. Their signature event is the annual Jamaica Jazz and Blues Festival (since 1996). Highlights of credentials include: Director of Production for the premier Reggae Festival in the Caribbean, Reggae SumFest; Associate Producer for MTV’s Spring Break in Negril, Jamaica; MTV2’s Heineken Summer House, Tropical Insanity Spring Break 2000, as well as Comedian Bill Murray’s TV show, The Sweet Spot; Production on St. Lucia Jazz Festival, the St Kitts Music Festival and the Turks & Caicos Music & Cultural Festival.