A parent-teen driving contract can help guide important conversations between parents and teens. 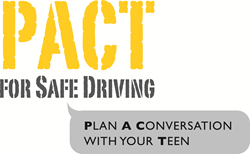 We want parents to recognize that even though their teens might be gaining some independence as they reach driving age, it is important now more than ever that they stay involved and closely monitor their young drivers.

National Teen Driver Safety Week is October 19-25, 2014 and the Ohio Chapter of the American Academy of Pediatrics (Ohio AAP, http://www.ohioaap.org) is joining the National Highway Traffic Safety Administration (NHTSA) in encouraging parents of teen drivers to talk to their teens and always set the rules before they hit the road.

Motor vehicle crashes are the leading cause of death for U.S. teens. In 2012, there were 2,055 teen drivers involved in fatal crashes, and 859 (42%) of those teen drivers were killed in crashes. While we can’t prevent all of these fatalities, surveys show that teens whose parents impose driving restrictions typically engage in less risky driving and are involved in fewer crashes.

“We want parents to recognize that even though their teens might be gaining some independence as they reach driving age, it is important now more than ever that they stay involved and closely monitor their young drivers,” said Dr. Mike Gittelman, MD FAAP, emergency medicine physician at Cincinnati Children’s Hospital Medical Center and chair of the Ohio AAP Injury Prevention Committee. “Teens are still kids. They still need rules and restrictions, and believe it or not, teens do listen to their parents.”

Parents have a responsibility to talk to their teen drivers about the rules outlined in Ohio’s graduated driver licensing (GDL) law and to enforce them. But sadly, according to the NHTSA, only about 25 percent of parents have serious talks with their kids about safe driving.

The Ohio AAP program, PACT for Safe Driving, is centered around a parent-teen driving contract, which is designed to help parents start these critically important conversations and work with their teens to set clear driving privileges as they gain experience. The contract includes Ohio AAP recommendations for several key areas, including: distracted driving, night-time driving, alcohol use, seat belt use and number of passengers in the car. These recommendations are based on research-based safety literature and, in many cases, are more thorough than the current GDL laws.

The Ohio Chapter of the American Academy of Pediatrics (Ohio AAP) promotes the health, safety and well-being of children and adolescents so they may reach their full potential. The Ohio AAP works to accomplish this by addressing the needs of children, their families, and their communities, and by supporting Chapter members through advocacy, education, research, service, and improving the systems through which they deliver pediatric care.