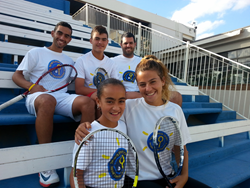 As the Israel Tennis Centers Foundation welcomes in the New Year 5775, the organization announced a series of events in November featuring a diverse multicultural team of Israeli players and their coach:

The Washington and Atlanta events will feature a special 'meet & greet' reception. The Israeli team and coach will share their very personal stories about the integral role that the ITC played in keeping them out of harm's way as rockets from Gaza rained down on their Centers during the recent conflict in Israel. In Washington there will also be a silent auction with unique one-of-a-kind items, the proceeds from which will support the many ITC programs that continue to positively impact over 20,000 Israeli children every year.

The Israeli contingent includes Shadi, a 14-year-old Bedouin who is part of the High Performance Group at the Samson Israel Tennis Center in Beer Sheva. He is one of the few Bedouin Arab children competing in both national and international tournaments alongside a large group of Jewish players. But thanks to the ITC's Coexistence Program, he has cultivated many close relationships that make the Center feel like his second home. "All of my friends are Jewish kids, and I like spending time with them on and off the court. I especially enjoy going to their homes and hosting them at my house in Rahat. My parents are also very close with the parents of my teammates. We are all one big family."