Gaijin Superheroes the band is the first to release a music track as a game application, for instant monetization 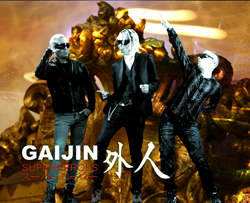 The name of the Gaijin Superheroes's first track: All the Japanese Girls Go: "Oooh!"

"You pay a dollar per track and you'll have to work – or play – to listen to our music. I think this is a win-win-win-win-win situation!"

You need to play that music, DJs!

In the game the player taps exactly to the lyrics on the screen, timed in milliseconds. The track stops if the player does not score points constantly. Since the mobile game is so far the only distribution channel, e.g. DJs in clubs will have to work -- or play -- hard to keep the music going.

Gaijin Superheroes is a pro-Japanese pop group from Finland. The band proclaims their love for the Japanese culture and they want to make Japanese EDM, electronic dance music. The already popstar millionaire Gaijin Superheroes don't really know Japanese, so their lyrics are ripped out of tourist phrase books. O tempora, o mores!

"You pay a dollar per track and you'll have to work – or play – to listen to our music. I think this is a win-win-win-win-win situation!", says Gosai Mastah, the singer of the band, sampler-like. While the music industry is struggling like the proverbial young actress in Hollywood and e.g. Spotify's pay is ridiculous for even multi-million selling artists, Gaijin Superheroes are laughing and drinking their champagne. Instead of the typical "I submit to non-existent royalties" attitude they decided to use the existing game industry business model as their distribution channel.