My Ugly Christmas Sweater, Inc. has kicked off their 2014 Sweaters4Troops campaign with a pledge to donate 500 Christmas sweaters to U.S. military personnel serving overseas. 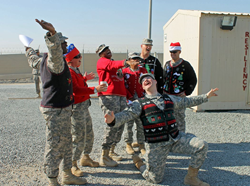 Tacky sweater events offer some levity for troops who are away from family and friends during the holidays.

Hundreds of colorful snowman, reindeer, and Santa sweaters are set aside at My Ugly Christmas Sweater, Inc., earmarked for donation to U.S. troops who are serving away from home. My Ugly Christmas Sweater has doubled its commitment to the troops for the 2014 season, and has pledged to donate 500 Christmas sweaters to service members during the upcoming holiday season in their Sweaters4Troops campaign.

My Ugly Christmas Sweater president Anne Marie Blackman has a long standing tradition of donating sweaters to the military that goes back to 2009, when she received an order for several sweaters from a U.S. service women serving in Afghanistan. “We were grateful to them for their service. As a small token of thanks we included an additional 20 sweaters in the order at no charge, which were then given out to other service members at the base.” Blackman has been donating Christmas sweaters to the military each year since.

The ugly Christmas sweater party phenomenon has taken off around the world, and Blackman believes that the themed holiday parties and 5K road races at military bases can be a morale booster. “Tacky sweater events offer some levity for troops who are away from family and friends during the holidays.” As part of last season’s campaign, she sent 100 sweaters to a base in SE Asia, and the soldiers used the sweaters for a holiday themed race on base, as well as for caroling, and for a digital photo booth (to send holiday photos home to family).

As a tie-in to their support of U.S. military personnel, Blackman has designed and manufactured a Patriotic Snowman sweater and will include a selection of the brand new red, white, and blue patriotic sweaters along with vintage sweaters with all military donations. My Ugly Christmas Sweater has put 500 vintage and Patriotic Snowman sweaters aside for the 2014 campaign, and is asking military families and media to get the word out so that the troops serving overseas can receive the sweaters in time for the holidays.

Information about the Sweaters4Troops campaign can be found online at http://www.MyUglyChristmasSweater.com.