Back2Basics Outdoor Adventure Therapy purchases a new house for residents in transition to build on the existing program. 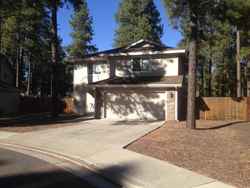 The [transition] program has become much more dynamic, but the vision remains the same: one addict helping another.

Flagstaff, AZ based drug and alcohol addiction treatment center, Back2Basics Outdoor Adventure Therapy has expanded it’s program and, in turn, real estate in the area with the purchase of a new residential house specifically for those in transition – residents who have graduated from the six month Back2Bacics program.

“Our census and programming has developed and increased, and we want to methodically set up our infrastructure for future admissions rather than a knee-jerk -- putting something together in the middle of the night-approach, which isn’t suitable or sustainable,” said Roy DuPrez, founder and CEO of Back2Basics.

The transition program at Back2Basics called Beyond the Basics was established by DuPrez and co-founder Graciela Del Moral about two and a half years ago after realizing that many of their graduating residents wanted to stay in Flagstaff a little longer to further develop themselves in their early sobriety.

“The [transition] program has become much more dynamic, but the vision remains the same: one addict helping another,” said Spencer Gharrity, current Transition Supervisor and Back2Basics graduate. “There are more activities to get involved in now including volunteering, yoga, art therapy, speaking at Northern Arizona University about addiction, to name a few.”

Previously, Beyond the Basics residents were living in a house next door to the Back2Basics residents in their initial six months of sobriety. With the new house in place, the program can now have six to eight transition residents.

While community is at the foundation of the entire program, it is important for transition residents to establish a sense of independence notes Brad Jones, Transition Tech and Alumni Coordinator and Back2Basics graduate.

“The new house has reinvigorated these guys,” said Jones. “They take pride in their new home and have really stepped up to the responsibility of maintaining the upkeep of the house. The entire transition program and dynamic has changed for the better as a result.”