Christine Kim becomes the first Korean born and raised actress to breakthrough into Hollywood with the upcoming release of “Lady”. Christine is currently represented by Dessler Media Talent. 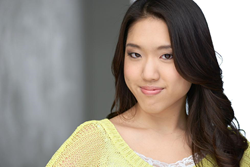 With K-Pop making its way to American shores over the past year, now Korea has sent the United States an acting sensation. Korean born and raised actress Christine Kim, who is now living in Los Angeles, has been in high demand these days and as one could can imagine, she is overwhelmed with all of the attention.

“I had dreamed of acting in America ever since I saw the Sound of Music as a child,” said Kim. “I taught myself English by listening to Christina Aguilera and followed my dreams all the way to Hollywood.”

Like many actors in Hollywood, Christine Kim’s rise to fame began with a series of short films while studying at the New York Film Academy. Kim’s incredible talent was discovered by directors and producers in Hollywood, all of which served as the springboard for one of Kim’s latest projects.

Kim is being recognized as the first Korean born and raised actress to make the full cross over to the American big screen. Where as other famous Korean Americans in Hollywood such as, John Cho (from American Pie and the Harold and Kumar franchise), Comedian Margaret Cho, and Daniel Dae Kim (Lost), have all found success in the US, Christine is the first actress to that was actually brought up in Korea as opposed to coming here as a child. Christine was able to learn English on her own by listening to American Pop music and watching American films.

“Lady” is expected to premier in early 2015. Christine is currently represented by Dessler Media Talent.