Award Given to Industry Leaders, Innovators 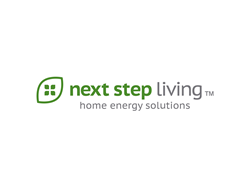 NECEC’s Breakout Company of the Year award is given to an organization that has stood out from the crowd and has made a breakthrough in their sector, hit an inflection point in revenue growth or its commercialization process and established itself as both an industry leader and market-maker. Past winners of this award include Digital Lumens (2013), Harvest Power (2012) and First Wind (2011). This year, Next Step Living tied with GreenerU, an organization that focuses on sustainability initiatives for higher education.

“Next Step Living has set the bar with its unique, whole-home approach to help homeowners save energy and money through energy efficiency and renewables,” said NECEC President Peter Rothstein. “We are thrilled to provide them this award and congratulate all of tonight’s award winners, which exemplify innovative companies leading research, development, adoption and deployment of clean energy technologies in our region.”

“We’re both humbled and honored to have won Breakout Company of the Year from the NECEC,” said CEO and founder of Next Step Living Geoff Chapin. “In 2014 alone, we’ve already helped more than 25,000 New England residents save money and live more comfortably and sustainably in their homes. We’re looking forward to increasing this impact in 2015.”

About NECEC (The New England Clean Energy Council and the NECEC Institute)
NECEC is a regional non-profit organization representing clean energy companies and entrepreneurs throughout New England and the Northeast through programs and initiatives that help clean energy businesses at all stages of development to access the resources they need to grow.

NECEC includes the New England Clean Energy Council, which is the lead voice for hundreds of clean energy companies across New England, influencing the energy policy agenda and growing the clean energy economy, and the NECEC Institute, which leads programs that support Innovation & Entrepreneurship, Cluster and Economic Development and Workforce Development.

NECEC’s mission is to accelerate the region’s clean energy economy to global leadership by building an active community of stakeholders and a world-class cluster of clean energy companies.