Almost half of businesses say that the biggest single productivity improvement would be to remove paper, yet paper consumption still increasing for one in five organizations 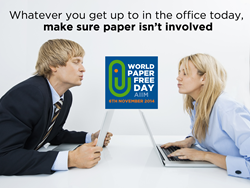 Legal and finance departments were considered to be the most resistant to the introduction of paper-free working, followed by HR and general administration.

More than one in five (21%) organizations are increasing their paper consumption, according to new research by independent information management analysts, AIIM. This is despite around half of businesses surveyed claiming that the biggest single productivity improvement would be to remove paper.

Sixty-eight percent of respondents in the new study, ‘Paper Wars 2014 – an update from the battlefield’, said that business-at-the-speed-of-paper will be ‘unacceptable in just a few years’ time’, as the rising expectation among customers and employees is for a much more rapid response. However, only one in five respondents has a board-level endorsed policy to actually reduce paper.

“Reducing paper use has a tangible impact on business, from improved customer service to increased productivity,” said AIIM president, John Mancini. “Business-at-the-speed-of-paper simply isn’t compatible with the modern digital enterprise and while we can’t eliminate paper altogether, we can all be much smarter about using less.”

For those organizations that have already committed to reducing paper, 60% of respondents have seen ROI on their paper-free projects within 12 months, and more than three-quarters had done so within 18 months. The biggest benefits from going paper-free were being able to give a faster response to customers and increased productivity.

AIIM launched ‘Paper Wars 2014 – an update from the battlefield’ today as part of World Paper Free Day 2014, an AIIM initiative created to show how much paper is wasted and how well we can manage without it.

Hundreds of the world’s biggest organizations have shown their support, including IBM, Accenture, London Underground, Citigroup, US Department of Defense and HP. With around 300 million tons of paper produced each year, resulting in almost four billion trees cut down annually, World Paper Free Day encourages businesses and consumers to pledge to go paper-free for one day. For each registration, AIIM is making a donation to The Arbor Day Foundation, a charity that encourages the planting of trees.

More than half of respondents admitted to printing personal copies to take to a meeting or to add a signature. They also use printed copies for reading offline or out of the office (50%), and particularly to review and mark up (45%).

Many respondents believe a lack of management initiatives (47%) and the perceived need for physical signatures (44%) were the main reasons why there is still so much paper in their business processes. Respondents also reported a general lack of understanding of paper-free options. Legal and finance departments were considered to be the most resistant to the introduction of paper-free working, followed by HR and general administration.

“Millions of unnecessary sheets of paper are printed every single day and businesses of all sizes are seeing the office cluttered and their processes slowed,” concluded John Mancini. “The fact of the matter is we need to use less paper. The paperless office will probably never arrive but achieving paper-free processes is a realistic goal for any business. There are many ways to capture, manage and store information digitally.”

Other key findings in the AIIM report include:

The survey was taken using a web-based tool by 444 individual members of the AIIM community between Sept 12, and Oct 07, 2014.