TWC Construction unveils first ever Home Shopping Network (HSN) studio in Las Vegas, Nev. for ProCaps Labs -- First live broadcast Saturday, November 8th at 8:00 a.m. PST. This is the first studio of its kind to be constructed for HSN as well as the first studio constructed inside a working vitamin factory. 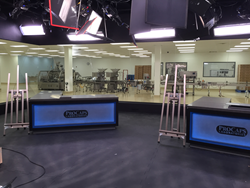 Our challenge was to design and build a fully operational live broadcast studio, including video, audio, lighting, satellite and all controls -- on par with anything you'd find on the HSN campus itself, said Matt Ryba, CEO TWC, Inc.

How does television’s leading brand of vitamins broadcast live Home Shopping Network (HSN) shows from their manufacturing facility without disrupting operations? The company turned to TWC, Inc., a Henderson based commercial construction firm, to design and build a fully operational “fishbowl” studio within the highly-regulated hygienic factory itself. The live-broadcast studio, which is the first of its kind installed in a manufacturing space, is located on the manufacturing floor of the ProCaps Laboratories headquarters in Henderson, Nevada.

Several times each year, ProCaps Labs would broadcast shows “live from Las Vegas” with each broadcast requiring the creation of a complete broadcast studio and a week-long total factory shutdown to preserve the hygienic manufacturing environment. Now, with the new, glass “fishbowl” studio, the show can go on while production goes uninterrupted. Thus enabling ProCaps fans and viewers to observe the production of their favorite vitamins “real time.”

“Our challenge was to design and build a fully operational turn-key live broadcast studio, including video, audio, lighting, satellite and all controls and technology fully integrated – on par with anything you’d find on the HSN campus itself – that would not disrupt the manufacturing process, but allow our client to actually feature their process during broadcasts,” said Matthew Ryba, CEO, TWC Construction, Inc.

The 1,400 square feet, state-of the-art broadcast studio, seamlessly integrated into the manufacturing environment, features extensive technology, including a dimmer lighting panel controlling more than 96 separate modules as well as five cameras inside the studio (and five more outside) and a moveable rear wall that comes down during broadcasts to allow the cameras more room to maneuver.

Following a period of complex design and planning, construction began in May of 2104 and was completed by July – well in advance of the first scheduled broadcast on Saturday, November 8, 2014 at 8:00 a.m. PST, live from Henderson, Nevada.

TWC Construction, Inc. is a general contracting firm specializing in commercial and industrial construction, licensed in Nevada, Arizona, California and Utah. The company, which was founded in 1997, has consistently been one of the leading construction firms in Southern Nevada as well as one of the first to be LEED certified in the region. It has also constructed some of the largest privately owned solar structures in the State of Nevada. TWC Construction has been the recipient of the Spotlight Award and Merit Award from the National Association of Industrial and Office Properties. TWC Construction attributes it strength, success and longevity in this market and the construction industry to its foundation having been built on providing unparalleled client service and extraordinary levels of professionalism and accountability. http://www.twcconstruction.com