The Grand Theatre in Salt Lake City will be Sundance Institute's newest film-screening site for the 2015 Sundance Film Festival and the festival's second largest movie venue. 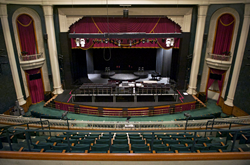 Audiences may enjoy a strong feeling of nostalgia when stepping in to the venue and will certainly admire the décor. The festival has such an eclectic mix of venues and the Grand Theatre will be an excellent spot to experience the Sundance Film Festival.

Salt Lake Community College’s historic Grand Theatre has been selected by Sundance Institute as the newest movie-screening site for the annual Sundance Film Festival taking place in Utah from January 22 – February 1. Locals now have the option to purchase a Grand Theatre Pass allowing access to all 19 films screening at the remarkable venue over the opening and closing weekends.

Sundance Institute Co-Managing Director Sarah Pearce said the demand for independent story telling in film has grown through the festival, which annually releases more than 100 world premiere screenings in Utah and screens more than 200 short and feature films annually.

“We are thrilled to be able to provide more than 20,000 additional seats in Salt Lake City over the course of the festival at the Grand Theatre,” Pearce said. “Sundance Institute is excited to work with the wonderful staff at Salt Lake Community College and the Grand Theatre. We look forward to exploring ways to support student filmmakers and university audiences during the Festival and year round.”

For SLCC, it’s a partnership 13 years in the making, dating back to when Richard Scott, interim dean for the college’s School of Arts, Communication and Media, first proposed the idea. Over the years SLCC has improved sound, lighting and projection capabilities at the Grand while at the same time the Sundance Institute’s audience has expanded and the need has grown for more screening rooms.

“I think it will be great exposure for us,” said Scott. “This is probably the best main floor in the city. It’s a very intimate space for something this size. To have a partnership of that caliber is very exciting for the institution. We’re also excited to show off the Grand.”

The Grand Theatre was built when South High School was constructed in the 1930s. Great attention was paid to intricate woodwork, tile and plaster details throughout the theatre. There are no columns that might obstruct a view – so, there’s not a bad seat in the house.

“You walk in and right away you’re transported to a different place,” said Seth Miller, interim director for the Grand. “It’s a different environment. You don’t see a lot of theatres like this around anymore.”

“The original 1930s interior of the Grand Theatre has been beautifully maintained and updated,” added Pearce. “Audiences may enjoy a strong feeling of nostalgia when stepping in to the venue and will certainly admire the décor. The festival has such an eclectic mix of venues and the Grand Theatre will be an excellent spot to experience the Sundance Film Festival.”

The Grand will be the second largest venue for Sundance Institute during the festival behind the Eccles Theatre in Park City, which seats 1,270.

The picturesque Grand Theatre is an 1,100-seat venue located at Salt Lake Community College’s historic South City Campus, home of the innovative and state-of-the-industry Center for Arts and Media at 1575 South State Street in Salt Lake City. The Grand dates back to the 1930s when it was part of South High School, which SLCC purchased in 1989, a year after the school closed. The theatre began offering productions that year and has since with great care and expense retained its Depression-era charm and attraction while also incorporating the latest technology. Every season the Grand is host to award-winning theatre and dance productions and concerts that attract arts enthusiasts from all along the Wasatch Front. Students and faculty in the arts at SLCC’s South City Campus now enjoy and, as a result, excel from having access to the Grand’s nostalgic look and feel and the Center for Arts and Media all in one place.

Founded by Robert Redford in 1981, Sundance Institute is a global, nonprofit cultural organization dedicated to nurturing artistic expression in film and theater, and to supporting intercultural dialogue between artists and audiences. The Institute promotes independent storytelling to unite, inform and inspire, regardless of geo-political, social, religious or cultural differences. Internationally recognized for its annual Sundance Film Festival and its artistic development programs for directors, screenwriters, producers, film composers, playwrights and theatre artists, Sundance Institute has nurtured such projects as Born into Brothels, Trouble the Water, Beasts of the Southern Wild, Fruitvale Station, Sin Nombre, An Inconvenient Truth, Spring Awakening, Light in the Piazza and Angels in America. Join Sundance Institute on Facebook, Instagram, Twitter and YouTube.