Courtney Thorne-Smith, Star of "Two and a Half Men" Believes We Can Save Them All

Courtney Thorne-Smith, who returns to television Nov. 13 in her role on the CBS comedy “Two and a Half Men”, joins Best Friends Animal Society's Save Them All campaign. 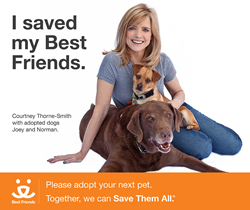 It's so funny to me that adopting a pet is perceived as generous on the part of the human partner. My adopted dogs have given me so much more than they've asked of me.

The world could use a little more dog hair … and more dogs and cats in homes according to one of television’s most familiar faces, Courtney Thorne-Smith, who is encouraging people to join Best Friends Animal Society's campaign to end the killing of dogs and cats in our nation’s shelters.

Thorne-Smith returns to television Nov. 13 in her role on the CBS comedy “Two and a Half Men” where she plays Lyndsey, the on-again, off -again love interest of Alan (played by Jon Cryer). One of television’s most enduring talents, Thorne-Smith has been a mainstay of popular television for more than 20 years starring in several consecutive hit TV shows. On ABC’s “According to Jim,” she played the charismatic wife opposite Jim Belushi. Her role as Georgia in Fox Television’s Emmy-winning series, “Ally McBeal” solidified her as a top television personality, but it was with her portrayal of Allison Parker in the much-loved primetime drama “Melrose Place” that Thorne-Smith first gained international attention.

Thorne-Smith is the latest celebrity to join Best Friends Animal Society’s Save Them All® campaign. They join Danny Trejo, Carrie Ann Inaba, Denise Richards, Nils Lofgren, Josef Newgarden, Amanda Seyfried, Cecily Strong, Maggie Q, Elisabeth Rohm and other luminaries participating in Best Friends’ photo campaign featuring celebrities posed with their personal rescued dogs and/or cats in support of the Save Them All call to action.

“It's so funny to me that adopting a pet is perceived as generous on the part of the human partner.  My adopted dogs have given me so much more than they've asked of me-- and all without the difficult puppy period!  I thank my dogs every day for choosing me.  I'm so grateful to Best Friends for all of the wonderful work they do, and for spreading the word about animal adoption.  If it wasn't for animal advocates like them, I wouldn't have Norman and Joey (or their predecessors Ed and George) and my family's life would be far less joyful.  We'd also have less dog hair, but what's a little bit of dog hair when it comes with so much love?”

Courtney Thorne-SmithBest Fiends Animal Society's Save Them All campaign