Ticket Down announces that they have cut ticket prices across the board on Wrestlemania 31 which will be held at Levi's Stadium in Santa Clara, California. This popular ticket site is also offering their customer appreciation promo code CHEAP for added savings. 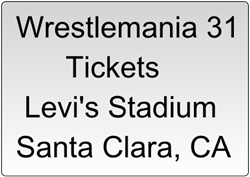 In professional wrestling, WrestleMania is the equivalent to the Super Bowl, World Series, NBA Finals, and Stanley Cup Championship. Each year, the event brings the biggest celebrities and the biggest stars to the ring for the greatest night of the year for wrestling fans. Over the years, some of the most legendary performers like The Undertaker, Shawn Michaels, Kurt Angle, Hulk Hogan, and Ric Flair have competed in the center of the ring, while celebrities like Pamela Anderson, Mr. T, Pete Rose, and more have taken part in the festivities.

On March 29, 2015, professional wrestling’s greatest night will be held from the newly opened Levi’s Stadium in Santa Clara, Calif. There is much time between now and the event, but the excitement level for wrestling fans is always high when talking about the event. What can fans expect to see at WrestleMania 31?

After losing for the first time in his WrestleMania career, fans will hope to see The Undertaker compete again in the center of the ring. At the event last year, The Undertaker was beaten by current WWE Champion and former Ultimate Fighting Championship Heavyweight Champion Brock Lesnar, dropping his record to 21-1. Whether he competes at the event next year is unsure, but fans should have a chance to get a ticket to what could be the final match of his career.

Levi’s Stadium opened this summer and is the home of the National Football League’s San Francisco 49ers. The venue has already hosted numerous events aside from football including international soccer, Major League Soccer, and will be the home to the Super Bowl. When WWE brings their blockbuster event to Santa Clara, they will pull no punches and provide fans with the best show possible.

Ticket Down delivers tickets to sold out concerts and events worldwide when no one else can, and they do so at discounted prices. This popular ticket exchange also has authentic Wrestlemania 31 tickets at Levi’s Stadium. Fans can choose from floor seats, front row seats, VIP seating, upper level, lower level, general admission, deluxe packages and more. Concertgoers can add promo/coupon code CHEAP for added savings on any ticket order.