"In search of my own skin", Sujata Tibrewala shares her unusual icons in feminine Strength at RAW San Jose

Sujata Tibrewala, an ecofeminist artist, is to be featured at RAW San Jose on November 19th with her art featuring strong female icons outside of the popular mass culture 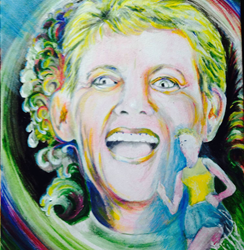 Sujata Tibrewala talks about a diaspora of women from history and today who epitomize the unconventional qualities of the female sex at RAW San Jose on November 19th. These are women who are comfortable in their own skin, they do not fit into the idea of what society thinks a "women" is, and yet each one demonstrates the beauty of human body and spirit in their own unique way.

"Lucy" (first human known to have lived) and Pam Reed (first human to run 300 miles without sleeping) are excellent example of female strength according to Tibrewala. She observes that Lucy was as strong as her male counterpart as she was an equal partner in hunting and gathering, and was also carrying the babies around while they were at it. Pam Reed is an excellent example of what a female body can achieve given proper training and time. After all, years of domestication renders even the lions unable to fend for themselves, and women have been domesticated for 100s of years now.

The goddesses from around the world, of "generation", "destruction", "love", "sex", "knowledge", "health", "disease", "war" and "peace" like Isis, Athena, Inana, Maat and Kaali, some whom are even worshipped today are proof that women were not always weak. These goddesses apart from their strength also represent both negative and positive qualities , unlike the black(evil) and white(good) world of today's gods. This is important since impossibly perfect ideals are as hurtful as abuses, since they make one feel forever imperfect.

The perfect images of women bombarded by today's media playing havoc with a woman's self esteem are excellent example of this.

These icons that Tibrewala chooses, are the ones who are comfortable in their own skin. They feel their bodies are just instruments to execute the tasks they want to execute, and hence its appearance is secondary. These icons are not a certain body type, or a skin type and may not be classified as conventionally beautiful, but yet have beauty beyond what the eyes can behold.

One of the most powerful icons she conceptualizes and chooses is "Mitochondrial Eve" , the matrilineal most recent common ancestor (MRCA) of all currently living anatomically modern humans, who is estimated to have lived approximately 100,000–200,000 years ago. This is the most recent woman from whom all living humans today descend, on their mother’s side, and through the mothers of those mothers, and so on, back until all lines converge on one person. Scientists could trace her because all mitochondrial DNA (mtDNA) is passed from mother to offspring without recombination from fathers. She is fittingly depicted as the Mitochondrial Mother, the mother of all humans born off of mother Earth, the "Powerful ONE".

GoddessGoddess from the caves to the surviving civilisations