Garth Brooks tickets for his shows at the First Niagara Center March 6 and 7, 2015 become available for the public to buy today. Tickets for all Garth Brook shows including St. Louis, Little Rock and Tulsa remain available, as well as advance purchase of concert tickets going on sale next week for Pittsburgh, at GarthBrooksConcerts.com in association with TicketsCheapest.com from Financial Firebird Corporation. 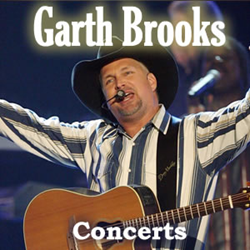 The long anticipated return of Garth Brooks arrives! Garth Brooks comes to Buffalo, NY March 6 and 7 for shows at the First Niagara Center. So far a total of only four Buffalo shows, have been announced. Previously Garth announced 3 shows for the TD Garden in Boston, but recently Garth Brooks Boston concerts doubled to now total six. Garth performs his concerts in Boston January 22-25. Additionally, Brooks holds seven concerts at the BOK Center in Tulsa, January 9-17, with concerts at the Verizon Arena in Little Rock, AR on December 11, 12 and 13 as well as Scottrade Center St. Louis, MO shows today, Saturday and Sunday. Recently Garth revealed he will perform in Pittsburgh, PA on February 5 and 7, announcing a Thursday night show and two Saturday performances at the Consol Energy Center. Tickets for Pittsburgh concerts go on sale December 12 at 10am ET but fans need not wait; they can buy Garth Brooks tickets in advance of the public sale without any special memberships or codes. Tickets to these events are expected to sell out fast. Last minute tickets for all Garth Brooks shows are available at GarthBrooksConcerts.com online.

The most successful country musician of all-time, Garth Brooks has sold in excess of 100 million albums worldwide, figures that rival those of Elvis Presley. Rising to fame with his self-titled album in 1989, Brooks followed up with a series of multi-platinum records including "No Fences," and "Ropin' the Wind." Playing in stadiums packed to capacity with fanatical fans, his 90's concerts earned legendary status for their dynamic sound and energy. Brooks announced his retirement from touring in 2000, spending the larger part of the following decade out of the public eye. Slowly re-emerging into the spotlight, Brooks now returns with a grand world tour. Country music fans should not miss the opportunity to see him perform a selection of his greatest hits, like "The Dance," "If Tomorrow Never Comes," "Friends in Low Places," and "The Thunder Rolls."

In addition to Garth Brooks, the First Niagara Center in Buffalo hosts Bob Seger and the Silver Bullet Band on December 17, The Trans Siberian Orchestra performs two shows on December 30 and Fleetwood Mac will be in concert on New Year’s Eve.

Tickets for any of these concerts and others can be purchased using the E-Ticket option that allows fans to print a ticket right from their computer. With the 125% ticket guarantee of authenticity and guaranteed admission to the Garth Brooks concert, fans need not be concerned about an E-ticket.

GarthBrooksconcerts.com and TicketsCheapest.com operate in the ticket resale market, similar to sites concert fans may be familiar with including Stubhub. Try TicketsCheapest.com for other hard to get tickets like MLB, NFL, NBA, NHL and all major events in addition to popular concerts.

The site to buy tickets for Garth Brooks Concerts, Cheap Tickets online and its sister sites, including GarthBrooksconcerts.com and a site to purchase Tickets for Broadway or tickets for Broadway tours, all geared for the consumers looking for low prices, are affiliated with the Financial Firebird Corporation Travel Group.
Financial Firebird Corporation, established in 2000 and proud BBB member, provides unbiased consumer information, software and marketing services. These sites to buy tickets online operate in the resale market and maintain no relationship with the venues or performers. The resale ticket market allows consumers access to popular events once the box office has sold out or to buy premium seats when the venue no longer offers any inventory. Within the group of these secondary market ticket services the Financial Firebird owned ticket sites offer lower prices than competitors. Find the sites at GarthBrooksconcerts.com and TicketsCheapest.com where they welcome music fans to engage in their own comparison to prove which resale site offers the cheapest concert tickets online.