Burger Republic from Nashville takes center stage at the recent World Food Championships in Las Vegas, receiving the highest score in the competition for a burger and taking fifth place overall. It's Burger Republic's first time in this competition, and it won't be its last. 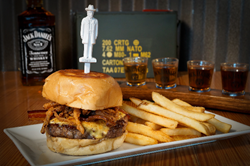 'During the ‘structured build’ segment, we created the burger that scored the highest in the entire competition...we will be introducing that burger at our restaurants soon,' said Jackman.

Heading into the final day of the competition on Sunday, Burger Republic was in first place – scoring high marks with both its Tennessee burger and a new burger created specifically for the event. The new burger, now titled The 96! (named after its high score of 96 in the second round) was the highest scoring burger judged at this year’s competition.

By placing in the top 10, Burger Republic automatically receives entry into the 2015 World Burger Competition.

“It’s an honor to compete on a world stage for the best burger and do so well,” said Drew Jackman, who partnered with another industry veteran, Jeff Warne, to create Burger Republic. “We were one of the few rookies in the final round of the competition, so there are lessons learned we will definitely rely upon for next year. Still, we’re proud of how we performed under pressure and that the both the Tennessee burger and our newest burger, the 96!, scored so high with the judges. That’s great validation of our burgers and execution.”

The 2014 World Food Championships featured three rounds of competition: 1) Signature Dish: competitors create their best recipe for judging; 2) Structured Build: this round forced everyone to create their own spin on the same basic dish; and 3) Infused Ingredient: the top 10 competitors faced off by using the same ingredient in their final category dish.

“During the ‘structured build’ segment, we created the burger that scored the highest in the entire competition. It’s a bleu cheese-infused burger with balsamic-glazed bacon, sautéed mushrooms, onions, steak frites and a garlic-horseradish aioli,” said Jackman. “As a result, we will be introducing that same burger into our restaurants very soon.”

Burger Republic’s Tennessee burger, the entry in the “signature dish” segment, features a Jack Daniel’s honey bourbon glaze, a slice of American cheese sprinkled with a Memphis-style barbecue rub and topped with a few slices of maple-glazed Benton’s bacon and quick-fried onion crisps. The burger’s initial claim to fame was appearing in Zagat’s “50 States, 50 Burgers” post in October 2013: http://www.zagat.com/b/50-states-50-burgers#42.

For information about the 2014 World Burger Championship, go to:
http://www.worldfoodchampionships.com/competitions/2014/world-burger-championship

In addition to winning the Battle of the Burger competition, Burger Republic has been consistently recognized in the burger category of the “Toast of Music City” of The Tennessean as well as the “Best of Nashville” in the Nashville Scene.

About Burger Republic
Burger Republic was created to provide the best-tasting burgers and beverages at an affordable price. To make the perfect burger, Burger Republic starts with 100-percent fresh Certified Angus Beef that is hand-formed into a patty and cooked-to-order on a flat-top grill to sear in the juicy flavor. The beef is ground using a combination of cuts: brisket, chuck and short rib. Local and regional products play a key role in the line-up, such as Benton’s bacon and Charpier’s brioche buns.

For non-beef eaters, other sandwich possibilities include a ground turkey burger, an Ahi Tuna burger, chicken breast fillet, and a savory vegetarian patty made in-house with red beans. Burgers and sandwiches are paired with a hearty side. Selections include crisp tator tots, French fries, homemade chips, and creamy mac and cheese topped with Benton’s bacon. Lighter options include mixed salad greens and vegetable of the day. Several entrée salads round out the menu.

Beverages receive special treatment at Burger Republic, which offers 30 rotating craft beers on tap from America’s best brewers as well as 25+ milkshakes – handspun in both spiked and non-alcoholic concoctions.

The first Burger Republic opened May 23, 2012 in the Lenox Village Town Center development, just off Nolensville Road in southern Davidson County. The second location opened Jan. 23, 2014 in the Pine Street Flats building in the Gulch area of downtown Nashville.