Joe Hinshaw's "In The Closet, Under The Bed" Helps Provide Tools For Children To Cope With Nighttime Fears

"In The Closet and Under the Bed" is a book about children’s imaginations as they confront those scary things that go bump in the night. Through a series of misadventures the hero negotiates his own settlement that makes everyone happy and secure. 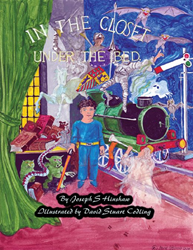 "I want to tell you my story and how I made friends with these creatures. If you are having the same issue this might help you."

The story teaches (children) how to come to terms with their fears while having a few laughs reading the story.

The sounds of an old house as it settles or the wind blowing against the window can make some very scary noises. In reality they are nothing but as a child with a pure and fertile imagination they can mean many things. Children curl up on their bed and surround themselves head to foot with their stuffed animal collection to protect them from their own monsters. The stuffed animals become children's best friends and stand their watch successfully for many years. "In the Closet and Under the Bed" explores the time in life where a boy comes to terms with his own monsters. He is very creative in his solutions and will probably someday be very successful in business. "I hope you can spend that time curled on the bed with your own children and in the end they can make their own peace with their own monsters." -- Joseph Hinshaw.

Hinshaw's love for writing started when he was about 10 years old. He had started reading the Hardy Boys series purchasing them at the toy store in a nearby shopping center. Soon he had read the complete set and would check regularly for any new releases. His mother had a typewriter. It was only used for his older sister’s homework for the most part. Two doors south of their house lived his Godmother. She was a school teacher. She taught 1st grade. They discussed his school work and his interest in the Hardy Boys. She was very interested. He started writing a children’s mystery book to surprise her but as that process continued she became his editor, mentor and supporter. The book had somewhere around two hundred and eighty pages hand typed by the hunt and peck system. It took two years to finish. Hinshaw was very proud of it. He put it away for a while but one rainy day he picked it up to read it. As he read through the pages he felt like a stranger. It seemed like another hand other than his had put the words on the paper. It had to be another mind that developed the story. He felt totally separated from the book by this time. He was surprised after finishing the read through at its impact. Two months later his mother was cleaning up and did not like clutter. It was swept into her trash can and out to the curb before he knew it was missing. He was upset but swore at this time that he would write more books in his lifetime and he has.

Joe Hinshaw met David Codling, Illustrator, through a strange path of relatives and business connections. In 2001, just after the terrorist attacks on the twin towers, Joe made a trip to England to train a contract company to perform outsourced work from his American Company. An employee of the American company was the brother of David’s wife Rosemary. They met up at the Leeds airport and Joe stayed in their home for two weeks. With the business out of the way in a few days, a trip to Holland was scheduled for David to play guitar in a band for an art gallery show opening. The trip was a success and a lifelong friendship was born. Joe was immersed into a new world of artist and musicians and it kindled a fire to do creative things in his later life. David has many talents. He received his NDD (National Diploma of Design) from Leeds College of Art in 1963 with a painting specialty. He was a graduate of the Royal Academy of Art in London. He received his RASC (Royal Academy Schools Certificate) in 1966. While at the academy he won a bronze medal for painting and various drawing prizes. He was the first to be awarded a full scholarship to the prestigious school. David is a member of PRS (Performing Rights Society). In addition to his art David had played in a band of renown in the 70's and 80's in England named “Quintessence”. He took on the persona of Maha Dev for their performances. This band performed at many of the mainstream music festivals in England and Europe. They also performed a Royal Albert Hall. He joined yet another band in the 1980's and currently performs with the band members in collaboration writing new music in this band originally from the San Francisco area called “Made in Japan”. This band had performed a movie soundtrack for a cult horror film that is currently being resurrected for rerelease to theaters. David, with his old band mates, are currently writing and producing music for other possible movie scores and at least one upcoming album.

Joseph Hinshaw has written a series of books for this same age group called “Old Joe’s Pirate Adventures. The first two are with David now for illustration. He has written two books for the upper elementary grades called “The Fishing Story” and “My Summer on the Farm.” These are stories that a friend related to him. He claimed to not have the talent to put the words to the paper so Hinshaw collaborated with him on his visions. He is working on another thriller/drama series entitle “Siblings.” It is loosely based on growing up in Indianapolis in the 1950s through the current time. Most of his poems are based or real life situations, people he meet or personal situations.

"In the Closet and Under the Bed" is available through Amazon.com, http://www.TotalRecallPress.com, and Books-A-Million.

Founded in 1999, TotalRecall Publications, Inc. publishes non-fiction books in a variety of fields, including computer and financial certification exam preparation and library education, with many titles adopted as college texts. These titles are also distributed to libraries, corporations and government agencies via ProQuest, EBSCO Publishing, Books24x7.com.

The company founder, Bruce Moran, is a former NASA IT professional and school computer instructor who started TotalRecall to produce exam prep guides to accompany his pioneering BeachFront Quizzer computerized practice test engine. The Quizzer CD was licensed for inclusion in the computer certification study guides produced by such publishers as Wiley and McGraw-Hill.

In the Closet and Under the Bed explores the time in life where a boy comes to terms with his own monsters.