American Metal Roofs (AMR) President, Frank Farmer says Michigan winter will be mild and makes a FREE Roof Offer for December. If it snow six Inches on New Year’s Day, an American Metal Roof will be free to all participating December AMR customers. 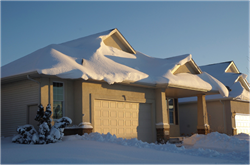 My gut tells me things are going to get milder before they get worse. And I’m so sure of it that I’m making this special 100% Refund offer in December. -Frank Farmer- President, American Metal Roofs

American Metal Roofs President Frank Farmer has taken on a big wager this month. He is so sure that Michigan will see a milder winter this year than last year, that he is putting his money where his mouth is. Farmer’s latest offer gives customers a terrific incentive to buy a new roof this month.

The Promotional period runs from December 1, 2014, through December 24, 2014. Only roofs purchased during the promotional period with a signed waiver are eligible for the refund. Details are outlined on the AMR website.

Frank Farmer is committed to serving the community. In addition to the free roof give away, if the snow does hit the mark, Frank Farmer has promised to buy a truckload of food from "Companies Feeding Families" and personally distribute it to hungry families in Genesee County!

Farmer encourages everyone to visit the AMR website to learn more about the promotion, the rules and how to register. Interested parties may also call 1-844-Metal Roofs to set an appointment.

"I grew up in the UP, so I know something about winter weather. Okay, we’ve had some early snow this fall, that doesn’t mean it’s going to be another long snowy winter like last year. I’ve seen dozens of Michigan winters and I don’t think we’ve ever gotten two really bad ones in a row. My gut tells me things are going to get milder before they get worse. And I’m so sure of it that I’m making this special 100% Refund offer in December. But if I’m wrong…well, let’s just say I’ll be writing a lot of checks on January 2nd."