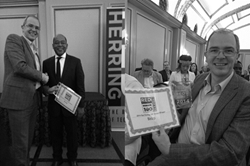 Is there a universal best practice when going global? How does a private company reach out to the giants? How can entrepreneurs ensure their companies stay ahead of the innovation curve?

Just some of the inspirational topics on the agenda at last week’s Red Herring Global forum held in Los Angeles, California where Bizagi proudly picked up its award for appearing on the Red Herring 100 Global shortlist.

The event, which pools the top private companies from the regional competitions in Europe, North America and Asia, follows Bizagi’s appearance on the Red Herring Europe 100 list in April this year.

"We were impressed with Bizagi’s breakthrough business model and strong growth demonstrated early 2014," says Alex Vieux, publisher and CEO of Red Herring. "Since then, their pioneering spirit – opening five new office locations in the US for example – has shown this isn’t a company scared to put its money where its mouth is. They truly deserve the kudos of a Global listing."

The awards top off an unprecedented year of recognition for Bizagi, which has seen customer Generali shortlisted for the PEX Excellence Awards as well as taking two Gold awards at the WfMC BPM Excellence Awards 2014.

Red Herring Global is the culmination of a year’s work scouring the globe and reviewing thousands of privately held companies. This year’s forum featured keynote addresses from over 20 leading investors and CEOs of game-changing companies from around the world.

"Red Herring is all about recognizing our achievements as a company so it’s a joy to take the trophy back to the people who make it happen," says Bizagi CEO Gustavo Gomez. "I found the event not only useful but very inspirational…from companies seeking cancer cures to rocket scientists on the brink of making space travel a reality…to meet so many like-minded entrepreneurs; from China to Japan, America to Europe…just amazing!"

About Bizagi
Bizagi (which stands for business agility) is a privately-owned company run by software entrepreneurs who are experts in Business Process Management (BPM). Over 350 global customers have selected Bizagi to model and automate their business processes which results in improved operational efficiencies, shorter time to market and business agility. Our enterprise customers gain significant competitive advantage by using Bizagi’s software to streamline mission-critical processes (cross-functional, complex and international) as well as mundane daily routines. With global headquarters in the UK, offices in Europe, USA and Latin America, Bizagi is supported by a strong implementation partner network worldwide. For more information, please visit http://www.bizagi.com.