Red e App's new marketing campaign focuses on bringing light to the lack of corporate communication with hourly and non-desk workers, leading to an undisenfranchised American workforce and overlooked drain on the economy. Its primary vehicle is a clever parody of a political campaign where CEO Jonathan Erwin runs for U.S. Secretary of Labor. 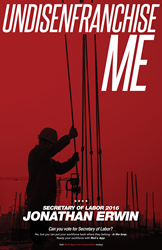 We can make a major dent in the inefficiencies of companies by ensuring all employees are included, not excluded, from the very connection that makes them feel valued, respected and important.

In an unprecedented attempt to save the U.S. economy, Red e App is proud to offer Jonathan Erwin, CEO and founder, as a candidate for United States Secretary of Labor. The fictitious marketing campaign to have him “elected” launched today with a special election page at http://redeapp.com/votejonathan. Visit to learn more about the campaign and sign up for updates.

The tongue-in-cheek effort centers around the single campaign platform to undisenfranchise U.S. front-line, hourly and non-desk workers. It is their disconnection from company communications that leads to astonishing low levels of productivity and profits (Gallup Sept 2013). These employees often don’t even have company email addresses. By plugging them back into the company’s communications flow, businesses and the economy function properly again.

Red e App hopes companies everywhere will join us in undisenfranchising their employees. Campaign updates and tid-bits will be sent using the #undisenfranchise hashtag.

Campaign platforms you need to be aware of:

The not-so-serious Erwin campaign centers around the very serious perspective that previous technology attempts to fix workflow and process problems have focused on certain end results, but not the fundamental issue: employee communication and engagement. Mobile proliferation has unlocked unprecedented value to companies that recognize the status quo of communications is no longer viable in today’s business environment.

Communicating with front-line, hourly and non-desk workers enhances morale, connects employees to the mission and vision of the company, drives benefits participation, compliance, recognition, training and scheduling. Not to mention, it sometimes results in better holiday gift exchange loot.

“We’ve seen it with our current client base which has the potential to undisenfranchise more than 50,000 employee users, and is now currently communicating with more than 10,000 active users,” Erwin said. “We can make a major dent in the inefficiencies of companies by ensuring all employees are included, not excluded, from the very connection that makes them feel valued, respected and important.”

What better way to do that than to have Erwin simply take over as Labor czar of the entire country?

In all seriousness, no, Jonathan Erwin isn’t actually running for any office. The campaign is designed to bring light to the fact that most companies are disenfranchising employees by inadvertently leaving them out of the communications loop. Red e App is the only safe, private, mobile platform that solves this problem for all company employees. The silliness includes Secretary of Labor posters and images you can share on your social networks and an astonishing image of Jonathan with a bald eagle on his shoulder. See more at http://redeapp.com/votejonathan.

About Red e App
Red e App is the only mobile communications platform designed to empower and engage all of a company’s employees, including hourly, front-line and non-desk workers. The mobile application comes in iOS, Android and Kindle versions and provides private, secure and spam-free communications between a company and its employees, groups of employees and even employee-to-employee.

More about the campaign can be found at http://redeapp.com/votejonathan.