It was a week of cosmic coincidence at the New York Film Academy, as its Los Angeles campus welcomed guest speaker Al Pacino while its Union Square location screened his daughter and NYFA alumna, Julie Pacino’s feature film Billy Bates, which she produced. 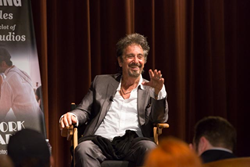 "Connect with whatever it is we’re trying to say in our work. Become. Become it, absorb it and let it come out and let the unconscious free. And I strive for that.” - Al Pacino

The New York Film Academy has hosted industry elites in the past such as Steven Spielberg, Ron Howard and Kevin Spacey. Having the iconic Oscar, Tony and Emmy-winning actor Al Pacino, known for his groundbreaking performances in such movies as The Godfather, Scarface, Serpico and Scent of a Woman, among others, was truly a momentous day in NYFA’s history.

As fate would have it, it was also a proud day for Al Pacino, knowing his daughter has paved ways in her own career, as Julie continued her cross-country tour with a NYFA screening of her new film, which is currently playing at the Quad Cinema in New York City.

Mr. Pacino received an uproarious, standing ovation when he came out to speak to a packed theater of acting and filmmaking students, who had just be privy to an exclusive screening of Barry Levinson’s funny and touching upcoming erotic comedy, The Humbling, which opens in theaters nationwide on January 23rd, 2015. Mr. Pacino’s performance as an aging actor involved with a younger woman admirer was nothing short of magnificence. Students were inspired by Mr. Pacino’s words, paying close attention to each and every word — forgetting their smartphone addiction for the duration. Even students at NYFA Australia's Sydney and Gold Coast locations were able to view the Q&A via Skype from halfway around the world.

Of the numerous words of wisdom, Mr. Pacino had this to say in regards to acting and the artistic process in general, “I love the line that Michelangelo said in a poem when he was painting the Sistine Chapel, he said, ‘Lord, free me of myself that I may please you.’ Meaning, get to that place in us where we’re not censoring ourselves or trying to do it good or right, but rather connect with whatever it is we’re trying to say in our work,” Pacino recalled. “Become. Become it, absorb it and let it come out and let the unconscious free. And I strive for that.”

In addition to Mr. Pacino’s extensive insight, students and faculty were quite taken with his warm and humble manner. As such, it wasn’t a surprise to hear his daughter and her partner Jennifer DeLia’s take on being successful in a highly competitive film industry.

“You realize that everyone, from actors to PA’s, should be treated the same — be humble — realize it’s a collaboration from everyone.”

It was refreshing to see how humble a mega-success like Al Pacino could still be, and how his daughter has taken on the very same outlook on life and her career.

You can view a preview from Al Pacino's guest speaker event on NYFA's Headlines section of their website, by clicking here.