Gold Jersey Founding Member Bobbleheads are individually numbered to only 1,500 with a limited number remaining for new members 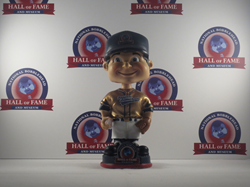 With only 1,500 ever made and many already sold, we don’t expect these to last much longer

"We’re very excited to have the Founding Member bobbleheads arrive before the holidays and to get them out to our early Founding Members," said Phil Sklar, Co-Founder and CEO. “Memberships make a perfect gift for anyone who enjoys bobbleheads, and this very rare bobblehead will make any collector or fan very happy this holiday season! With only 1,500 ever made and many already sold, we don’t expect these to last much longer.” Those purchasing memberships as a gift will receive a digital Membership Certificate which can be customized.

“The Founding Member Bobbleheads arrived last night, and we have an action packed day planned for one lucky bobblehead as we show him around the Milwaukee area,” said Brad Novak, Co-Founder and President. “Those who follow along the bobblehead’s journey today on any of our social media platforms can win some great prizes including rare bobbleheads and Memberships to the Hall of Fame and Museum.”

The National Bobblehead Hall of Fame and Museum will also be donating a Major Leaguer membership to Toys for Tots for every Membership given away during the contest and an additional Membership for every 10 new Kickstarter backers from today through this Saturday, December 13.

“With the holiday season here and only 15 days remaining until Christmas, we want to do our part to make sure as many children as possible have a toy this holiday season,” said Sklar. “We encourage everyone to consider donating a toy, volunteering, or making a monetary contribution to Toys for Tots or a similar organization this holiday season.” More information about Toys for Tots including drop-off locations and volunteer opportunities nationwide can be found at http://www.toysfortots.org.

Memberships, which include the Founding Member Bobblehead, can also be purchased at Hometown Fan, which is located at 322 N. 76th St. in Milwaukee. Stay tuned to http://www.BobbleheadHall.com for announcements about additional locations in the Milwaukee area where Memberships can be purchased.

About the National Bobblehead Hall of Fame and Museum