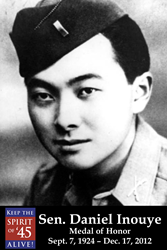 All Americans can learn from our Greatest Generation about commitment, service and patriotism as their spirit lights our way into the future.

Preparations for a nationwide commemoration of the 70th anniversary of the end of World War II next year will be announced today at a press conference at the National Press Club in Washington, DC. on Wednesday, December 17, at 10:00 a.m.

The announcement is being made by a grassroots coalition that is organizing events that will be taking place throughout the country during the year. A 70th Anniversary celebration of the Greatest Generation's Greatest Day will kick off on Friday, August 14 with a public "Kiss in" in Times Square, followed by a weekend of flyovers by WWII vintage aircraft, '40's style swing dances and concerts, and observances at Major League Baseball games and other sports events.

The weekend will conclude on Sunday, August 16, with an around the world Tribute in the form of "the longest continuous wreath laying ceremony in history" that will begin in the American national cemetery in the Philippines, continue westward across Europe and the continental United States, and end at the National Cemetery of the Pacific in Hawaii at the grave of the late Senator Dan Inouye.

Inouye, who passed away on December 17, 2012, received the Medal of Honor and many other decorations for his service as a member of the legendary all Japanese American 442nd Regimental Combat Unit during WWII, and was the most senior member of the Senate at the time of his death.

The press conference will conclude with a wreath laying and a performance of Taps by members of Bugles Across America at the Memorial to Japanese American Patriotism (corner of Louisiana Avenue and D Street) at approximately 11 a.m.

Announcements are also being made in San Diego and in Honolulu, HI where a wreath will be placed by the Military Order of the Purple Heart at Senator Inouye's gravesite in the National Cemetery of the Pacific at 12:00 noon.

Surviving Japanese American WWII veterans will ride on a float in the Rose Bowl on New Year's Day to help kick off the 70th Anniversary commemorative year. The float, themed "Go For Broke," the battle cry of the 442nd and 100th combat units, is being produced by the City of Alhambra, CA.

“Senator Inouye exemplified the best qualities of his generation, and devoted his life to service to his community and country. It is only fitting that we make this announcement on the anniversary of his passing so that all Americans can begin to plan to participate in the Tribute honoring all those of his generation who achieved so much for our nation and the world,” said Pat Little, National Commander of the Military Order of the Purple Heart, which is helping mobilize veterans groups around the country to take part in next year’s “Tribute.”

Senator Inouye was part of a group of elected officials who led a campaign in the United States Congress calling for a new annual national "Spirit of '45 Day" to honor the men and women of the World War II generation, which passed unanimously in 2010. Spirit of '45 Day is now being observed on the second Sunday in August in hundreds of communities throughout America, including during virtually all Major League Baseball games.

“In 2010, I was honored to support the observance of 'Spirit of ’45 Day' that commemorates the national effort by those in uniform and on the home front that defeated the forces of aggression, ended the horrors of the Holocaust, and brought World War II to an end,” said Senator Susan Collins. “From their example, all Americans can learn about commitment, service and patriotism as their spirit lights our way into the future.”

For more information about the Spirit of '45 Day and the 70th Anniversary commemoration, visit http://www.Spiritof45.org.