Research by PsychTests.com indicates that people with a narcissistic personality tend to have major self-esteem issues, despite their outward confidence. 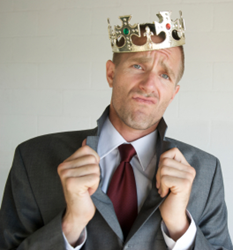 Narcissists may nonchalantly brush off criticism in front of others, but it does hurt them quite deeply.

Some people in power, or those who are drawn to fame like a moth to a flame, often display characteristics of narcissism – a grandiose view of themselves, a strong desire for admiration, and a tendency to believe that others are envious of them.

Despite the fact that narcissists display self-confidence to the point of arrogance, researchers at PsychTests declare that it’s likely an illusion. According to data they collected for their Self-esteem Test, narcissists tend to have a very fragile self-image that can be easily shattered.

Analyzing the results of over 2,000 people, researchers at PsychTests.com compared the self-esteem of narcissists and those without narcissism traits.

What they found was a significant yet negligible difference of only three points on their self-esteem scores (80 vs. 83 respectively, on a scale from 0 to 100). On the surface, both groups appeared the same: They both had a strong sense of self-worth, a low need for approval from others, and seemed to be in good social standing (i.e. felt accepted by others).

However, when PsychTests researchers took a closer look at how narcissists and non-narcissists respond to criticism, that’s when the differences became apparent: Those who score high on narcissism do not take criticism well.

“Narcissists thrive - or rather, survive - on admiration and approval from others,” explains Dr. Jerabek, president of PsychTests. “So when someone dares to challenge their grandiose self-view, they end up shocked and upset; it’s like an error message pops into their mind as ‘does not compute’. People who are not narcissists, on the other hand, accept criticism with grace and learn from their mistakes and failures.”

“Narcissists may nonchalantly brush off criticism in front of others, but it does hurt them quite deeply,” continues Dr. Jerabek. “In fact, any form of criticism can be a harsh and rude awakening. And that’s the catch with narcissists: They may appear confident on the surface, but much like the fabled egg in the popular nursery rhyme, keeping the shell of their self-image intact is a precarious affair. In the end, their self-esteem will go through extreme ups and downs depending on how others view them in any given moment.”

Narcissistic Personality Disorder requires therapy, especially in severe cases. For those who don’t have the disorder but recognize that their self-esteem tends to be highly dependent on what other people think, here’s what the researchers at PsychTests recommend:

Want to assess your self-esteem? Go to http://testyourself.psychtests.com/testid/3102

Professional users of this assessment (therapists, life coaches and counselors) can request a free demo of the Self-esteem Test or any other assessments from ARCH Profile’s extensive battery: http://hrtests.archprofile.com/testdrive_gen_1

Just like Humpty Dumpty, narcissists tend to have a fragile outer shell – their self-esteem is volatile and their self-image can be easily shattered.Narcissists thrive on approval and abhor criticism.