Torture and Assassination in U.S. Policy, Thomas Picketty's "Capital," and Much More: Read All About it in the Winter Issue of "Ethics & International Affairs" Journal 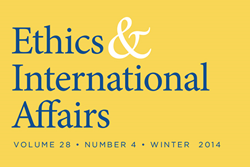 This issue includes an essay by Jacinta O'Hagan and Miwa Hirono on "cultures of humanitarianism" in East Asia; articles by Christopher Kutz on torture, American security policy, and norm death, and Ruben Reike on an international crimes approach to preventing mass atrocities; a book symposium on Mathias Risse's "On Global Justice," featuring contributions from Richard Arneson, Helena de Bres, Anna Stilz, and Risse; and a review essay by Nancy Birdsall on Thomas Piketty's "Capital." The entire issue is free online for a limited time. To read this issue, click here.

Fragmentation of the International Humanitarian Order? Understanding "Cultures of Humanitarianism" in East Asia
Jacinta O’Hagan and Miwa Hirono
What are the implications of the emerging diversity in humanitarianism? By examining such traditions in East Asia, we can better understand variations in the idea across cultures.

How Norms Die: Torture and Assassination in American Security Policy
Christopher Kutz
Because of their sensitivity to public mobilization around normative questions, democracies do better than authoritarian regimes in internalizing certain kinds of constraints. But that very sensitivity makes the long-term survival of these norms precarious.

Against Relationalism in Global Justice Theory
Richard Arneson
Much recent global justice theory consists of arguing for the idea that we owe more to fellow countrymen than to mere foreigners. Risse's book is the most sophisticated elaboration and defense of these convictions concerning national partiality.

Mathias Risse on Justice in Trade
Helena de Bres
Risse tries to stake out a middle ground between those who fail to recognize the full normative significance of contemporary international relationships and those who ground highly demanding moral requirements in social structures that cannot bear the weight.

On Collective Ownership of the Earth
Anna Stilz
Once positive laws and conventions regulating property evolve, in what sense is the world still owned by humanity? If I own my house and my backyard does humanity own it too? Precisely what incidents of ownership might humanity retain?

Response to Arneson, de Bres, and Stilz
Mathias Risse
The author discusses his attempt at constructing a multilayered theory of global justice, where many considerations must be brought into reflective equilibrium.

Thomas Piketty's "Capital and the Developing World"
Nancy Birdsall
What is the future of the global capitalist system? In returning economics to politics, Capital reminds us that the road to global distributive justice requires finding strengthening legitimate and democratic global governance.

Founded by Andrew Carnegie in 1914, Carnegie Council for Ethics in International Affairs is an educational, nonprofit, nonpartisan organization that produces lectures, publications, and multimedia materials on the ethical challenges of living in a globalized world. For more information, go to http://www.carnegiecouncil.org.