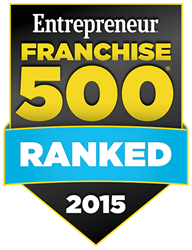 “We are pleased that all of our brands have been ranked once again. This continued success is evidence of our dedication to franchising, our franchisees, and their customers.”

Since 2012, all seven of The Dwyer Group brands have consistently ranked on Entrepreneur Magazine’s Franchise 500. “We are pleased that all of our brands have been ranked once again,” said Mike Bidwell, CEO of The Dwyer Group. “This continued success is evidence of our dedication to franchising, our franchisees, and their customers.”

Entrepreneur Magazine’s Franchise 500 is an annual ranking of the best franchises based on financial and statistical data listed in surveys completed by franchisors across the nation. All franchises are judged based on identical criteria regardless of size.

The list honors franchisors that offer the best opportunities for success based on criteria such as financial strength, stability, growth rate and size of the system.

Entrepreneur Magazine has been publishing the Franchise 500 for 36 years.

Aire Serv was ranked as number 243 on the list. “We are truly excited to be ranked yet again as one of the top franchising opportunities by Entrepreneur Magazine,” said Doyle James, President of Aire Serv.

Rainbow International was ranked at 167 on the list. “We consider this recognition a great honor and validation of our core ideology,” said Mark Welstead, President of Rainbow International. “Rainbow International exists to improve lives; not just for our customers, but also for the independent businessmen and women who own and operate our local franchises. Improving lives is at the heart of every business decision we make.”

Mr. Rooter Plumbing was ranked at 421 on the list. “It is an honor to be ranked once again as a top franchise opportunity,” said Mary Kennedy Thompson, President of Mr. Rooter and Executive Vice President of The Dwyer Group. “Without the strength our franchisees provide to our network and the incredible team here at our home office, we would not be the franchisor that we are today.”

The Grounds Guys was ranked at 216 on the list. “As a four year old company, it’s incredible that we have been ranked yet again as one of the top franchise opportunities,” said Chris Elmore, President of The Grounds Guys.

Mr. Appliance was ranked at 446 on the list. “At Mr. Appliance, we are always striving to create a world class experience and making the Franchise 500 is affirmation of that mission,” said Doug Rogers, President of Mr. Appliance.

Mr. Electric was ranked at 457 on the list. “To be ranked among the top franchise opportunities available is an incredible honor,” said Joel Worthington, President of Mr. Electric. “This ranking is evidence of the mission we serve at Mr. Electric to improve lives by providing an opportunity for business success.”

Glass Doctor was ranked at 439 on the list. “I am always excited to be ranked in the Franchise 500,” said Mark Liston, President of Glass Doctor. “For over 30 years I’ve worked with franchisees across the world. At the same time, Glass Doctor is now celebrating our 52nd anniversary. Our franchisees are the best and I dedicate this award to them.”

The Dwyer Group was reacquired in 2014 by the Riverside Company and plans to clear one billion in sales this year.