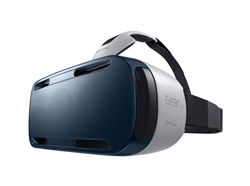 "People can go hang gliding in a box in their living room or watch the fountains in Dubai - this is insane. VR enthusiasts have been waiting for this moment."

360Heros is a company dedicated to supporting panoramic video producers and creating 360 video and photo gear. The company's technology utilizes GoPro cameras to record every angle of an environment. With a full 360 x 180 degree field of view captured, the end product is an .mp4 file that can be experienced via virtual reality headsets.

By simply saving the .mp4 file to the Samsung Galaxy Note 4, panoramic video content can be experienced via Samsung Gear VR headsets. The virtual reality content drops the user directly into the video, allowing them to explore locations across the globe. “People can go hang gliding in a box in their living room or watch the fountains in Dubai - this is insane. VR enthusiasts have been waiting for this moment” stated one user upon watching the virtual reality content.

Google Cardboard VR viewers are also an option, as 360Heros released a mobile app featuring hundreds of interactive 360 videos. Available for iOS and Android, the 360 Video Library App has a VR setting that presents videos in a dual screen mode optimized for cardboard VR. The app works with a mobile device's gyroscopic sensors, allowing users to mimic their real-world motions within the virtual reality headset.

The app's content and browser-based content is hosted via the 360Heros Video Hosting Center where producers can upload, share and syndicate panoramic videos. This unique hosting and licensing center lets producers focus on content while the licensing and legal aspects of media production are taken care of. The syndication service gives producers the ability to earn up to 80% residual commission from their panoramic video content and share it with a global audience. Content quality is another benefit, as the hosting service supports optimized panoramic video with variable resolutions of 4K, 2K or 1K mobile streaming.

For videographers and producers, this technology means being able to help their audiences explore an environment with an unmatched level of immersion and experience it through VR devices.

Interested in learning more about this technology? Visit 360heros for more details.