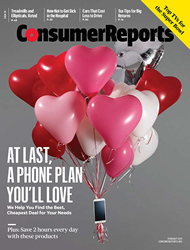 With the New Year close at hand, many Americans use this milestone to start a new diet or exercise regimen. But a new survey from Consumer Reports finds that as many as one in four consumers try to shortcut the process with the use of weight-loss supplements.

In addition to the survey on weight-loss supplements which can be found online at http://www.ConsumerReports.org the February issue of Consumer Reports magazine features the latest ratings of treadmills and ellipticals and finds that many have added features and connectivity that make it almost as good as having a personal trainer.

Many of the models Consumer Reports tested allow users to individualize their workouts, making the best machines more motivating to their users. That’s great news since 64 percent of those who exercise regularly choose to do so at home according to market research firm Mintel.

Research shows the key to success is finding a diet and exercise regime people can stick with. As part of the exercise equipment ratings, Consumer Reports evaluated equipment costs, ergonomics, construction, ease of use, exercise range and user safety as well as the latest high-tech tools to achieve fitness goals.