Best Friends Animal Society http://www.bestfriends.org explains why the best chance for survival of neonatal kittens born outside is to keep them with their mother, and also shares resources on how to foster baby cats. 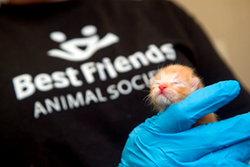 People don't understand that most animals shelters simply do not have the resources to care for neonatal kittens.

Twelve years ago, it seemed like the right thing to do. Janice Dankert found a litter of tiny kittens under her porch and her first response was to scoop them up.

“I hadn’t realized that free-roaming female cats -- who haven’t been spayed yet -- do leave their kittens alone for a few hours every day,” says Dankert, a community cat expert for Utah-based Best Friends Animal Society. “But the vast majority of the time the mama returns in plenty of time to feed them. When I took these kittens into my home and started bottle feeding them. I had no idea how much work, time and emotion was ultimately involved. I also didn’t know at that time that the best chance for survival for neonatal kittens that are born outside is to keep them with their mother. Fortunately, I was able to carry this through and these kittens made it.

“I also didn’t realize that female cats go into heat again immediately if their kittens are pulled from them. Two months later, I had the same mother cat back under my porch with another litter of kittens. It was then I realized the enormity of this problem. Honestly that is what lead me to get actively involved in helping community cats,” said Dankert who now heads up Best Friends’ Four Directions Community Cat Program in southern Utah.

Roughly 70 percent of the cats who end up in America’s shelters are killed (National Council on Pet Population Study and Policy Shelter Statistics Survey, 1994-97). Most of these are community cats (stray and free-roaming). In response, Best Friends is working to save lives by implementing innovative trap/neuter/return (TNR) programs across the country. Through TNR cats are humanely trapped and taken to a veterinarian who spays/neuters the cat, vaccinates them and tips one ear as a visual signal that this cat has been sterilized. The cats then are returned to their outdoor home to live out their lives.

“Right now we are in what is known across the country as ‘kitten season’ and shelter employees everywhere are bracing themselves for the influx of babies,” said Dankert. “At Best Friends, we hear from shelters all over the country that are overwhelmed with the arrival of kittens still weeks away from being old enough to be weaned, spayed or neutered and adopted. Some arrive without mothers and need to be bottle-fed every two hours, and the workload almost immediately outweighs what shelter staff can take on.

“What I don’t think most people understand is that most animals shelters simply do not have the resources to care for neonatal kittens, so well-meaning people who ‘rescue’ a litter of kittens by taking them to the shelter have in almost every instance inadvertently signed the kittens’ death sentences,” Dankert said.

Best Friends Animal Society offers the following tips on what to do if you find a litter of kittens outdoors:

1.    First of all – don’t panic. Observe and leave the kittens alone - make sure they have been abandoned before you take action. You’ll often find that their mother is simply out looking for food or for a good place to move them. Take note of the exact location so you can share the address and description of where the kittens are located if you find that they have been abandoned.
2.    Contact your local animal shelter to get the contact information for your local community cat or TNR program. These groups will be able to determine if mother comes back in a normal time frame or if the kittens will need to be bottle fed.
3.    Though it may go against your instincts, don't immediately scoop kittens up and take them to the shelter.
4.    If the mother does not come back and you are willing to volunteer with your local group to care for the kittens, please first read Best Friends’ resource article “Feeding and Caring for Bottle Babies” .
5. If the mother does return, keep your eye on her and the kittens until they are old enough to be trapped, spayed or neutered and returned to the area they came from. TNR is not only the most humane method of preventing cats from entering the shelter system, it’s the most effective.

“Bottle feeding is a very rewarding but also incredibly demanding endeavor, so make sure you have the time, resources and a suitable home to care for the kittens,” said Dankert. “And please also remember how important it is to spay and neuter your pets. This is the single most important thing we can do to prevent unwanted litters.

“Best Friends has an education campaign called Fix at Four and you can enter your zip code to find local veterinarians and low-cost spay/neuter clinics.”

Best Friends Animal Society is the only national animal welfare organization focused exclusively on ending the killing of dogs and cats in America's shelters. An authority and leader in the no-kill movement since its founding in 1984, Best Friends runs the nation's largest no-kill sanctuary for companion animals, as well as life-saving programs in partnership with rescue groups and shelters across the country. Since its founding, Best Friends has helped reduce the number of animals killed in shelters from 17 million per year to 4 million. Best Friends has the knowledge, technical expertise and on-the-ground network to end the killing and Save Them All®.

Kitten has something to say