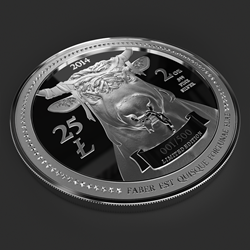 Front of our physical Litecoin

A new business launched this week, breaking into the physical digital currency market. Coinographic Ltd has just released its first physical representation of the digital currency, Litecoin, in the form of a Limited Edition, solid silver 25 LTC. What makes Coinographic (http://www.coinographic.com) different to other coin companies is that they only sell their coins in the currency they represent.

In a novel approach to coin design, Coinographic ran a competition for the coin design amongst the Litecoin community. The submitted designs were then voted on by the community, meaning that the Limited Edition coin already has a lot of fans. Since the competition closed Coinographic Ltd have been busy working with the designer finalising the details ready for production.

Determined to produce a high quality coin the company are minting the Limited Edition 25 LTC in 2 ounces of fine silver. The silver coin comes presented in a wooden case, complete with Certificate of Authenticity, a booklet about the Company, the Designer and Litecoin itself. The company's aim is to produce a coin that's more than just a physical representation of Litecoin, but something that will become highly collectable in its own right.

Coinographic sprung from the interest of the directors in digital currency, and Litecoin in particular. They wanted to create an exceptional coin as a physical representation of the currency and at the same time to stimulate interest in Litecoin as well as support the currency. For that reason they made the decision to only sell the coin in the currency it represents. If you want to get your hands on one of these superb Limited Edition coins, you're going to have to invest in Litecoin. Don't worry if you don't know much about crypto-currencies. There are full instructions on their website on how to get hold of some Litecoins.

Coinographic plan to produce coins representing other digital currencies in the near future, but for now they are concentrating on Litecoins. In the next few weeks a limited production 10LTC is due, followed by a 1LTC.

Coin number 1 has gone to Charles Lee, and coins 2-10 are up for auction within the Litecoin community. If you want to take part in the bidding, then you need to get over to Litecointalk, otherwise you can buy their Physical Litecoin direct from their website.

Rear of our physical Litecoin