The Legal Intelligencer Named Justin McShane as one of the "2013 Lawyers on the Fast Track". Attorney McShane was the only private criminal defense attorney selected in all of Pennsylvania. 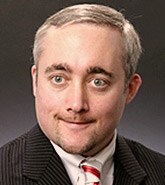 The thing that really touches me is that I was chosen for this list from my peers around the state. It means that people who know the law and aware of the work are doing out there, recognize and appreciate the work that this firm has done.

Every year The Legal Intelligencer awards young lawyers from Pennsylvania who have emerged as leaders and honors them with the title Lawyers on the Fast Track. This year Attorney Justin McShane was selected by an eight-member judging panel composed of evaluators from all corners of the legal profession and the state as a recipient for this prestigious award.

At the gala dinner event, The Legal Intelligencer’s editor-in-chief, Hank Grezlak, highlighted the importance of the award and the competitive criteria used to select the winners. He stressed that the recipients of this award demonstrate that with hard work and innovative ideas --- legal leaders are still emerging.

“We take this opportunity each year to shine a light on the next generation of Pennsylvania attorneys, those who are already making an impact on the legal community and will only grow in stature as they advance in their careers,” the Legal Intelligencer states on its website.

Attorney Justin McShane said, “The thing that really touches me is that I was chosen for this list from my peers around the state. It means that people who know the law and aware of the work are doing out there, recognize and appreciate the work that this firm has done. It is a true honor and I am humbled by it.” Attorney McShane was the only private criminal defense attorney selected in all of Pennsylvania.

McShane founded The McShane Firm in 2003 and has since emerged as a spearhead in defending DUI and Criminal Cases. The Firm’s niche lies in their determination to defend the citizens of Pennsylvania by becoming experts in the field of forensic science. McShane attends and instructs thousands of hours of scientific training courses per year. He has lectured all across the United States to scientists, prosecutors, judges, policy-makers, equipment manufacturers, and defense attorneys. He continually writes for scientific publications. He hosts advanced hands-on courses. The McShane Firm Attorneys are know as “The Science Attorneys” for good reason. They use validated science to legitimately defend those who are accused of a crime.

“A special thanks to all of the clients and attorneys who have encouraged me along the way. Your appreciation fuels my passion to reach new heights. The fight for justice never ends and I will continue to fight using my two weapons: science and the truth,” said McShane.

Justin McShane was also awarded with Rising Stars for the past two years, and this year he was selected to Super Lawyers for 2013 by Super Lawyers Magazine.

Attorney McShane is a trial attorney who specializes in using forensic science in defending citizens amongst us who have been accused by the Government. He is a frequent invited guest lecturer at national, state and local seminars that are attended by prosecutors, police, investigators, lawyers, judges, academics, scientists, machine manufacturers, and policy-makers. He has been invited seven times to lecture at the American Chemical Society (ACS) National meeting and has presented three times at the 2011, 2012 and 2013 American Academy for Forensic Science (AAFS) national meetings. He was named a Fellow with the American Institute of Chemists. The ACS has named him a Senior Assistant Chromatography Instructor. He serves as the co-chairman of the Forensic Science section of the ACS-Chemistry and the Law Division. In 2013, he was named to the National Trial Layers Top 100 list. He is the Chairman/CEO of the McShane Firm, LLC, a seven attorney criminal defense and DUI law firm.