Actor Robin Williams’ suicide has prompted a national discussion of depression and suicide. “Rather than treating the presenting symptoms of depression from the outside in, I contend that it is finally the right time to treat the underlying cause from the inside out,” says neuroscientist Cynde Margritz of Peak Neurofitness in Arlington, Virginia. 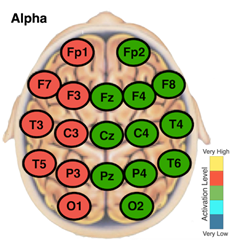 Through neurofeedback, a brain-based way to help the brain self-correct, it is now possible to alleviate the electrophysiological root of depression.

Actor Robin Williams’ suicide has prompted a national discussion of depression and suicide. As NBC’s Today Show reports, someone commits suicide every 13 minutes.

“Rather than treating the presenting symptoms of depression from the outside in, I contend that it is finally the right time to treat the underlying cause from the inside out,” says neuroscientist Cynde Margritz of Peak Neurofitness in Arlington, Virginia.

“Some of the accounts of Williams’ suicide have defined depression as a brain disease,” says Margritz. “Scientists who study brain waves have demonstrated that depression is a physical condition which can be defined in terms of specific brain wave activity. Through neurofeedback, a brain-based way to help the brain self-correct, it is now possible to alleviate the electrophysiological root of depression.”

Depression is the End-Stage of Anxiety
Depression can be viewed as the end-stage of anxiety. A move by the brain to protect itself from the high levels of nervous system hyper-arousal that it can only sustain for so long. The problem comes when the brain gets stuck in this mode.

Imaging shows this protective slow down occurs in the left hemisphere, particularly left frontal. A slow down means that area of the brain is producing too many slow brain waves relative to fast ones. In the case of depression the slow brain waves are in the alpha band. The left frontal area has to do with positive moods, motivation, and effective social interactions. When slowed down, it performs these functions less well, resulting in many of the symptoms of depression.

“To address depression with neurofeedback, we typically train you to produce more alpha waves on the right and decrease them on the left, restoring a more optimum balance,” says Margritz. “As the left prefrontal area begins to work better, you begin to feel more positive in your mood. The excess frontal alpha continues to diminish over a period of training sessions and relief becomes continuous and lasting.”

After working as a project manager with NASA for ten years, Cynde Margritz founded Peak Neurofitness, LLC, in 2006. Cynde made her move from outer space to inner space, when on a hunt for something to help her own ADHD. Through neuofeedback sessions, the so-called “brain fog” that she had lived with since a playground brain injury at age five finally lifted. The feeling was so compelling that she decided she would do this for other people. She pursued neurofeedback professionally in 2005, studying with many of the field’s pioneers. Her passions within the field are ADHD, brain injury, and PTSD.

With offices now in Arlington and Burke, Virginia, she has treated clients from NASA, the Federal Aviation Agency, the Department of Defense, the National Science Foundation, the White House, the Department of State, and other U.S. government agencies. Also, Margritz works with young athletes who have suffered concussions from football, cheerleading, and field hockey. The practice also trains clients from around the globe via the internet and remote training hardware.

Margritz currently serves as the CEO of Peak Neurofitness. Her background includes research in the areas of biophysics and cellular communication, program management, and international negotiation for NASA. She is also the developer of several educational programs to get kids excited about math, science, and nutrition, including Kids Kitchen Safari and SpaceJazz in partnership with Weekly Reader. She has an M.S. in Biology from Penn State University.

For more information on Peak Neurofitness, visit http://www.peakneurofitness.com/ or call 888-815-5829.