Making sense of drug side effects, from the January 2015 Harvard Women's Health Watch

The best way to understand drug side effects is to talk with a doctor or pharmacist. Older drugs generally have better information. 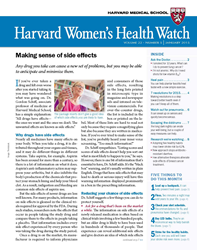 All drugs have effects. Some we want, others we don't. The unwanted ones are known as side effects. The January 2015 Harvard Women's Health Watch describes ways to limit or manage side effects.

The package insert that is supposed to give information about the potential side effects of a medication is likely to be more frustrating than helpful. Written in medicalese and printed in microscopic type, these inserts contain way too much information.
"Reading through scores and scores of side effects doesn't help you sort out what is most likely to happen to you," says Dr. Gordon Schiff, associate professor of medicine at Harvard Medical School. He suggests forgetting the inserts and trying the following instead:

1. Ask for a drug that's been on the market a while. The information on the side effects of a newly approved medication is often based on clinical trials involving, at most, a few thousand people. An older drug is likely to have been used by hundreds of thousands, even millions, of people. That experience can reveal additional side effects and give doctors an idea of which side effects are most common, which are most serious, and which might occur only after months or years of use.

2. Learn what to expect. For example, if nausea is a potential side effect, it's important to know whether to keep taking the drug because the nausea will eventually go away or to stop taking it. For some drugs, like benzodiazepines or opiates, it's important to understand the side effects of withdrawal and develop a plan for tapering off.

3. Ask for help. Not sure if a symptom is a drug side effect or something else? Talk with a doctor. Doctors generally know what side effects their patients have experienced, how severe they were, and how they can be managed.

Read other tips in the complete article: "Making sense of side effects"

Also in the January 2015 issue of the Harvard Women's Health Watch:

Harvard Women's Health Watch is available from Harvard Health Publications, the publishing division of Harvard Medical School, for $20 per year. Subscribe at http://www.health.harvard.edu/newsletters/womens or by calling 877-649-9457 (toll-free).

Media: Contact Kristen Rapoza at hhhpmedia@hms.harvard.edu for a complimentary copy of the newsletter, or to receive our press releases directly.