RIBER, the first Ibero-American futurist organization will gather in Santo Domingo to envision the future of the region in 2030 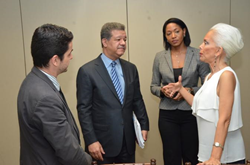 The Millennium Project and RIBER initiatives could help shape the future of the region and the world.

RIBER President and former President of the Dominican Republic, Leonel Fernández is convening a high-level panel of experts to discuss the challenges and opportunities of Ibero-America from now to 2030. Some 50 futurists from all around Ibero-America (comprising the countries of the Iberian Peninsula, Latin America, and the Caribbean) will gather for two intense days to discuss future scenarios for the region. This will be the first meeting of the newly-created Ibero-American Futurists Network RIBER (Red IBERoamericana de Prospectiva, RIBER in Spanish and Portuguese), the first such forward-looking organization for the intercontinental Spanish and Portuguese- speaking community.

The RIBER futurists are part of The Millennium Project, a global futurist participatory think tank with 55 Nodes around the world. The gathering will take place on February 2-3, in Santo Domingo, at FUNGLODE headquarters. “Ibero-America has to finally decide if it is going forward or backward in our rapidly globalizing world,” said RIBER’s Executive Director, José Luis Cordeiro.

Most of the participants coming to the meeting are also contributors to The Millennium Project publications "Latin America 2030" and "2013-2014 State of the Future", as well as the "FUTURES" encyclopedic dictionary, all available in English and Spanish.

"Latin America 2030" discusses four possible scenarios about the future of Latin America. Released with the occasion of the bicentennial independence celebrations in the majority of the region, the report presents diverse potential positive and negative developments for Latin America, to the year 2030. The scenarios take into account inspiring events identified by the participating experts, including some which might be less likely, but if they were to happen, would have great impact (the so-called “black swans” or “wild cards”). Showing some of the worst to some of the best possibilities, they depict futures ranging from a Latin America of failed states with ruling mafias, to a Latin America that is sending its first mission to Mars and is fulfilling all the Sustainable Developing Goals well ahead of 2030.

The Millennium Project’s latest “State of the Future” report shows that the world is improving more than the majority of pessimists acknowledge, but the future dangers are worse than the majority of optimists indicate. The global situation for humanity continues to improve in general, but at the expense of the environment. Dominican former-President Leonel Fernández explained that “The Millennium Project and RIBER initiatives could help shape the future of the region and the world.”

"FUTURES" is the most comprehensive futures studies encyclopedic dictionary that exists to date. It comprises over 1,000 terms and methods used in futures studies. It was produced with the contribution of more than 500 futurists from The Millennium Project network and is available in English and Spanish.

The Millennium Project is a global participatory think tank connecting 55 Nodes around the world that identify important long-range challenges and strategies, and initiate and conduct foresight studies, workshops, symposiums, and advanced training. Its mission is to improve thinking about the future and make it available through a variety of media for feedback to accumulate wisdom about the future for better decisions today. It produces the annual "State of the Future" reports, the "Futures Research Methodology" series, the Global Futures Intelligence System (GFIS), and special studies. Over 4,500 futurists, scholars, business planners, and policy makers who work for international organizations, governments, corporations, NGOs, and universities have participated in The Millennium Project’s research, since its inception, in 1992. The Millennium Project was selected among the top ten think tanks in the world for new ideas and paradigms by the 2013 University of Pennsylvania’s GoTo Think Tank Index, and 2012 Computerworld Honors Laureate for its contributions to collective intelligence systems.

Fundación Global Democracia y Desarrollo (FUNGLODE) is a non-profit organization founded by Leonel Fernández, former President of the Dominican Republic. FUNGLODE has offices in Santo Domingo and is devoted to promoting the ideas of democracy and development, including futures studies. FUNGLODE has a sister institution called Global Foundation for Democracy and Development (GFDD), with offices in New York and Washington, DC.