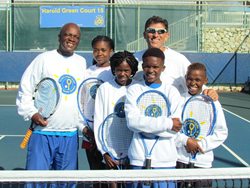 ITC Coach Ronen Moralli with the children and coach from Soweto, South Africa

The Israel Tennis Centers Foundation proudly announced that a team of children and their coach from Soweto, South Africa have arrived in Israel for 10 days of training at ITC centers throughout Israel. It is part of a unique Children to Children Tennis Diplomacy Exchange that will create lasting friendships and ambassadors for Israel around the world.

The South African team visit is the outgrowth of a 2013 ITC “outreach” trip by Head Coach Ronen Moralli who spent two weeks at the Arthur Ashe Tennis Center in Soweto, South Africa, teaching children and their coaches the unique ITC model for developing both tennis and life skills that have earned the ITC international recognition. The current initiative was made possible through close cooperation between ITC CEO Danny Gelley and ITC board members and the assistance of Israeli Ambassador to South Africa Arthur Lenk.

“Taking the Israel Tennis Center’s principles of understanding, cooperation and mutual respect and teaching children from other countries like South Africa these life lessons is really the essence of the visit,” said Tom Bernstein, President, Israel Tennis Centers Foundation. “It shows how Israel and the ITC can be at the forefront of the movement toward peaceful coexistence anywhere in the world.”

Four players and their coach landed at Ben-Gurion Airport in Tel Aviv on Monday, January 5th and quickly hit the courts at the ITC flagship center in Ramat Hasharon. Their itinerary includes training with children and coaches at ITC centers in Jerusalem, Haifa, Akko, Tiberias and Yokneam before heading back to Soweto, South Africa later this month.

Among the many inspiring aspects of this trip is the participation of Moses, the South African team coach. Moses was a leading South African player in the 70’s who was prohibited from competing against white players during the country’s apartheid era.
As a result, he was forced to quit the game, but fortunately for the children of Soweto he has resurrected his life and tennis career at the Arthur Ashe complex where he teaches young aspiring players, four of whom accompanied him on this historic trip to Israel.

“Sharing our unique tennis programs with young players and coaches outside of Israel is what we’re striving to achieve” said ITC CEO Danny Gelley. “In this case, we hope that the children visiting from South Africa will learn to dream bigger, aspiring to achieve to the best of their abilities. It is what the ITC has been teaching our children in Israel for almost forty years, and that model is what we would like to see emulated in other countries…empowering children beyond tennis and beyond borders.”

About the Israel Tennis Centers Foundation:
The Israel Tennis Centers Foundation (ITC) is a 501 (c) 3 not-for-profit organization that works tirelessly through the medium of sport to enhance the development of Israeli youth. Since opening its first center in Ramat Hasharon in 1976, the ITC has helped almost a half million children, many of whom come from outlying development towns throughout Israel. The ITC’s 14 centers stretch from Kiryat Shmona on the Lebanese border in the North to Beer Sheva bordering the Negev Desert in the South. http://www.israeltenniscenters.org.