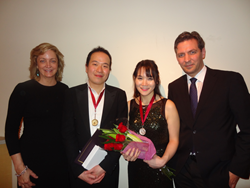 “This year’s festival featured many of the top young pianists from some of the world’s greatest music schools and teachers,” said Baruch Meir, the founder and president of the competition. “The talent on display throughout the competition was remarkable.”

Sung Chang earned top honors in the Bösendorfer competition, earning the $15,000 David Katzin Award and an opportunity to be a featured soloist with the Phoenix Symphony. Chang, of the Republic of Korea studies at the University of Music, Drama and Media Hanover, one of Germany's largest music-academies, performed Saint-Saëns, Piano Concerto No. 2 in G minor, Op. 22 in the Bösendorfer finals at the renowned Phoenix Symphony Hall on Sunday, Jan. 11, culminating a week of festivities and performances in the competition. The Bösendorfer competition features top pianists from around the world ranging in age from 19 to 32.

The Yamaha and Bösendorfer competitors vied for medals and prize money totaling $50,000.

Vanessa Meiling Haynes, who hails from USA/Juilliard School Pre-College, performed Beethoven Sonata in F minor, Op. 57 “Appasionata” in the Winners’ Recital of the Yamaha Senior Piano Competition on Saturday, Jan. 10 in Katzin Concert Hall on ASU’s Tempe campus. Haynes was awarded $4,000 and the gold medal in the Senior Competition, which features pianists ages 16 through 18.

Second prize was not awarded in this category. Chaeyoung Park captured the bronze medal and a $1,000 prize.

The top three winners in the Yamaha Junior Competition, for pianists 13 through 15, Haozhou Wang, who took home the $3,000 Addona-Burns Award and gold medal; Elliot Wuu, who captured the silver medal and a $2,000 prize; and tied for third prize were Charlie Liu and Allison To who earned the $1,000 Linda and Sherman Saperstein Award and the bronze medal.

EunAe Lee took second place in the Bösendorfer competition, capturing a $10,000 prize. This year, the Bösendorfer second place award was named in memory of Phyllis Chiat, a longtime advocate of the arts who passed away last August after a short battle with cancer. Chiat especially supported and loved classical music and the piano. The award was made possible through the generous support of art lovers in the community and patrons of the ASU School of Music who knew Phyllis Chiat and her work, along with her husband, Harold Chiat, M.D. The third prize in the Bösendorfer competition was not awarded.

The distinguished panel of judges for the 2015 competition featured Brazilian conductor and pianist Ricardo Castro, Vadim Monastyrski of the Jerusalem Academy of Music and Dance in Israel, Zhe Tang from the Shanghai Conservatory in the People's Republic of China, Aleksandar Serdar of the Belgrade Music Academy in Serbia along with ASU School of Music faculty members Robert Hamilton and Baruch Meir, the founder, president and artistic director of the competition.

“This year’s festival featured many of the top young pianists from some of the world’s greatest music schools and teachers, including The Juilliard School, the Moscow Conservatory, the University of Music, Drama and Media Hanover, the Royal College of Music in London and Arizona State University,” Meir said. “The talent on display throughout the competition was remarkable.”

Four Arizona students; three from Arizona State University and one from University of Arizona, were accepted to participate in this year’s competition, a testament to the tremendous quality of pianists in Arizona. Andrew Boyle, Nino Bakradze, Dani Shraibman, and Xiaoyu Zhang competed for the National Society of Arts and Letters Arizona Chapter Special Award for the best Arizona pianist. Nino Bakradze won that special honor.

Sung Chang won the Sangyoung Kim Award of $1,000, which recognizes the most outstanding performance of a virtuoso work in the Bösendorfer Competition.

The Sarra and Emmanuil Senderov Award of $500 was given to Samson Tsoy for the most outstanding performances of a composition by a Russian composer. Tsoy was honored with the award in the Bösendorfer competition, and Elliot Wuu earned it in the Yamaha Competition.

A pair of Yehuda Meir memorial awards of $250 was given to the two most outstanding artistic performances of an etude by Chopin. EunAe Lee won that award in the Bösendorfer Competition and Haozhou Wang won that honor in the Yamaha Competition.

Presented by the ASU School of Music and the Herberger Institute for Design and the Arts, in collaboration with the Phoenix Symphony, the Arizona Young Artist Committee and the Arizona Piano Gallery, this biennial competition is considered one of the best in the world.

Heather Landes, director of the ASU School of Music, and Steven Tepper, dean of the Herberger Institute for Design and the Arts, both congratulated all the winners and commended each of the participants in this year’s competition. “The Bösendorfer and Yamaha USASU International Piano Competition serves as a springboard for the development of the next generation of young artists and provides us with a reminder of the transformative power of music,” Landes said.

A gala recital featuring members of the jury opened the week-long event on Jan. 4, followed by the competition’s live solo rounds, which were opened to the public, providing exciting opportunities to see participants from all over the world competing for advancement to the final round. The Yamaha Competition reached its conclusion when, after the results were announced, the top medalists performed on a CFX, Yamaha’s flagship concert grand piano, in the Winners’ Recital.

The Bösendorfer Competition culminated in a once-in-a-lifetime opportunity for the finalists. Each played a final concerto on Bösendorfer’s flagship concert grand, the Imperial 290, at Symphony Hall, accompanied by The Phoenix Symphony under the baton of conductor James Feddeck.

Piano Gallery, Arizona’s premier piano showroom and the state’s largest Yamaha piano dealer, was instrumental in providing the practice pianos used throughout the competition as well as arranging for the concert grands used in the finals.

The winners were presented with medals individually handcrafted and designed by OT Jeweler of Mesa, Az., another generous sponsor.