Multiple ITC Centers Host Athletes from around the Country 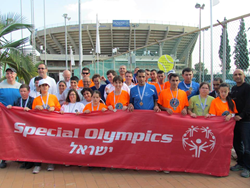 Athletes at the ITC Special Olympics

The Israel Tennis Centers, home to over 20,000 Israeli children from every corner of the country, played host to a very special event in late December at its center in Ramat Hasharon. Special Olympic athletes from five of its centers were represented, including Jerusalem, Tel Aviv, Haifa, Yokneam and Ramat Hasharon. Their ages ranged from 15 to 57, and they competed in a variety of tennis matches, some playing full court and others demonstrating individual tennis skills.

“Seeing this group really brought home the true essence of what the Israel Tennis Centers mission is all about,” said ITC Vice President of Global Development Jacqueline Glodstein. “If you want to know how the ITC uses tennis to help improve the lives of our young people, you need go no further than the events held for these very special athletes here at Ramat Hasharon.”

For three hours they competed at various levels, capped off at the end of the event with a closing ceremony that featured prizes for everyone, including gold, silver and bronze medals awarded in a variety of categories. More importantly, everyone who competed were handed medals for taking part. At the end of the tournament it was also announced that two players from this group would be competing in the 2015 World Special Olympics Games scheduled to take place in Los Angeles from July 21st to August 4th.

Through its various social impact programs, the ITC serves thousands of Israeli children every year, enhancing their social, psychological and physical needs. The programs are open to all children living in Israel, regardless of background, religious affiliation or economic circumstance. They assist children at risk, those with special needs like Down Syndrome and autism and children of new immigrants, while bringing together Israeli Arabs, Bedouins, Christians and Jews in ITC’s coexistence program. The goal is to help youth become lifetime champions both on and off the courts.

A large number of events are scheduled to take place at each of the 14 ITC centers throughout 2015. There are also exhibitions scheduled for various cities in the US that will feature children from the ITC flying from Israel to meet with donors and others interested in learning how the ITC positively impacts these and over 20,000 other children on a daily basis. For further information, visit the ITC website at http://www.israeltenniscenters.org.