Though e-cigarettes seem to be very popular right now, other quitting aids have been proven safe and effective like nasal sprays, gums and patches. 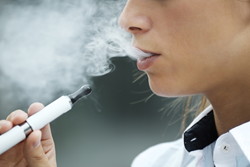 Given that cigarettes contain more than 6,000 chemicals – with 60 known to cause cancer – some professionals consider e-cigarettes less harmful. However, with that said, it is important to note that e-cigarettes are not regulated.

Electronic cigarettes, or e-cigarettes, seem to be everywhere right now. Their popularity has skyrocketed due to the belief that they can help smokers quit their habit, as well as for the variety of “fun” flavors they come in. But many health professionals are crying foul, saying these devices aren’t as safe as we’ve been led to believe.

Though some e-cigarettes look just like their tobacco counterparts and some resemble cigars, pipes, pens and even USB devices, they all have the same general anatomy.

“According to the 'Cancer Journal for Clinicians,' most generally consist of three parts—a replaceable or refillable nicotine-containing cartridge, a heater that converts the contents of the cartridge into a nicotine-containing vapor and a rechargeable, battery-operated heating element,” said Patricia Anasiewicz, nursing program coordinator with Community Health Services at Abington Health.

Since these devices contain nicotine but not tobacco, an increasing number of smokers have been turning to e-cigarettes as a tool to quit. However, their attempts to quit might be more successful with quitting aids that have been proven safe and effective. There are prescription medications that can also help people quit smoking.

“The Association for the Treatment of Tobacco Use and Dependency (AATUD) reports there’s no scientific evidence that e-cigarettes are safe or that they help smokers reduce or eliminate their consumption of tobacco. In reality, many consumers are not able to quit and sometimes discover they are now using both e-cigarettes, which can be quite expensive, as well as continuing to smoke,” Anasiewicz said.

The American Heart Association (AHA) isn’t too keen on using these devices as a cessation aid either, recommending smokers use some of the proven and safe tools available to help them quit, including pure forms of inhalable nicotine, nasal sprays, gums and patches.

Still, the fact that e-cigarettes don’t contain the same toxins typically found in traditional tobacco cigarettes may lead people to think that they’re a healthier and safer option.

“Given that cigarettes contain more than 6,000 chemicals – with 60 known to cause cancer – some professionals consider e-cigarettes less harmful. However, with that said, it is important to note that e-cigarettes are not regulated,” Anasiewicz said.

Random testing of the more than 250 types of e-cigarettes available on the market by the U.S. Food and Drug Administration (FDA) has found that some of these devices contain dangerous metals and contaminants, including some that can cause cancer. Propylene glycol, an active ingredient found in anti-freeze, mixes with water to produce the distinctive vapor produced by e-cigarettes. Manufacturers say a food-grade version of propylene glycol is used for the devices.

In addition, there’s some evidence that e-cigarettes may cause short-term lung changes similar to those caused by regular cigarettes, but, again, the long-term health effects are still unclear.

E-cig makers admit that the devices contain nicotine, but the packaging does not include a list of the ingredients. That means that users really have no idea what they’re inhaling, including just how much nicotine they’re consuming. Consuming or inhaling high levels of nicotine can cause dangerous disturbances in your heart rhythm.

Because they aren’t regulated, there’s no legal need for these devices to be labeled with their ingredients. The FDA is working to change that by proposing rules that would require warning labels and make it illegal to sell e-cigarettes to minors.

The bottom line is that research into the short-term and long-term health effects of e-cigarettes is ongoing, lagging behind the booming popularity of the devices. Since the ingredients haven’t officially been deemed safe, most doctors won’t recommend using e-cigarettes.